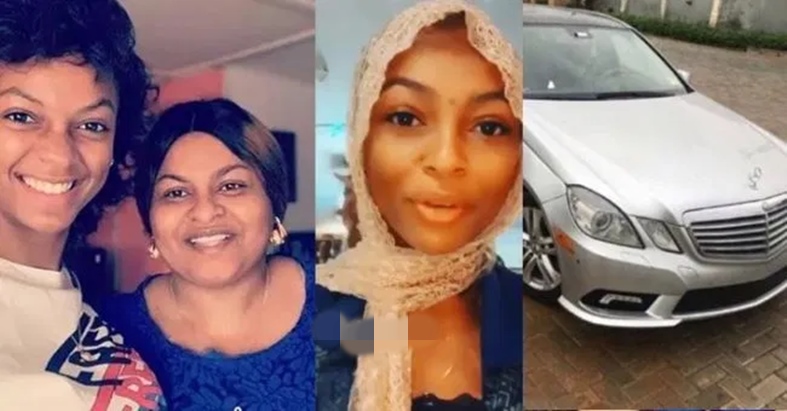 Sandra Johns, mother of content creator and influencer, Adeherself who is still in EFCC custody for alleged fraud has been called out on social media for shopping for a Benz.

Sandra Johns, was trolled after she was seen in a comment section making inquiries about the cost of a Benz car while her daughter is still detained.

Recall that EFCC arrested Aderherself and four others for Internet Fraud some weeks ago.

EFCC reported that  “while Adewale, 20, and his accomplice, Lamina Hamzat Ajibola, were arrested at the Agungi area of Lekki, Lagos State, the trio of Israel Onyebuchi, Emmanuel Olayode and Valentine Nwokorie were picked up at the Ibeju-Lekki area of Lagos State.”

The Commission also mentioned that the social media influencer, Adedamola Adewale who goes by the IG handle @adeherself has confessed to the crime of impersonating as a lady with the intent to deceive ‘her’ foreign prey.

The tweet also mentioned the items recovered from the suspects, one of which is the sum of N9,000,000 (Nine Million Naira) which was found in Adewale’s account. The Commission has mentioned that the suspects will be prosecuted accordingly after the completion of investigation.

Adeherself was later arraigned before Justice Sherifat Solebo of the Special Offence Court sitting in Ikeja, Lagos, on one-count charge of possession of fraudulent documents.

She pleaded not guilty to the charge and was ordered to be remanded in the EFCC custody.