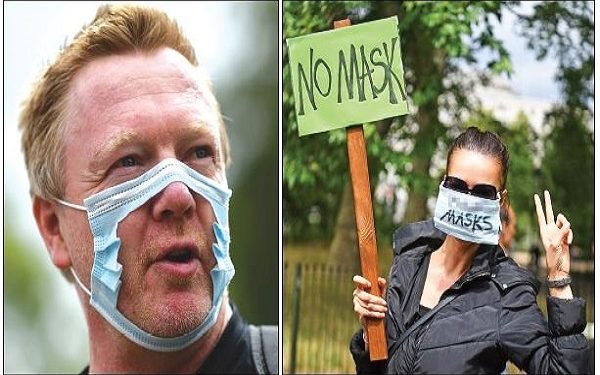 Despite increase in COVID-19 cases, protest against face-mask hits London

WITHIN NIGERIA learnt that the protest countered an announcement released by the UK government that masks must be worn in shops and supermarkets from Friday.

Following similar rules for wearing face coverings while travelling on public transport which started in June, the British Government toughened its stance on wearing of face coverings in public places in England

Demonstrators raised signs reading “I will be not be masked, tested, tracked’ and ‘no mask’ as they gathered for the Keep Britain Free march.”

The movement was founded by Simon Dolan, an aviation tycoon worth around £200 million, who earlier this month lost a High Court bid to overturn the government’s lockdown rules.

Launching the movement on July 6, the Essex-born entrepreneur said: ‘I believe in freedom of choice for all and the protection of personal liberties. The Government’s actions are crippling the economy, denying children education, and trampling over human rights.’

One man wore a plague doctor costume, another had a mask with the front ripped out and one donned a vest saying: ‘Save human rights. No to 5G. No to vaccinations.’

The march, which started in Speaker’s Corner and moved to Marble Arch, also looked to repel ‘the erosion of freedoms in the UK’ brought in during lockdown.