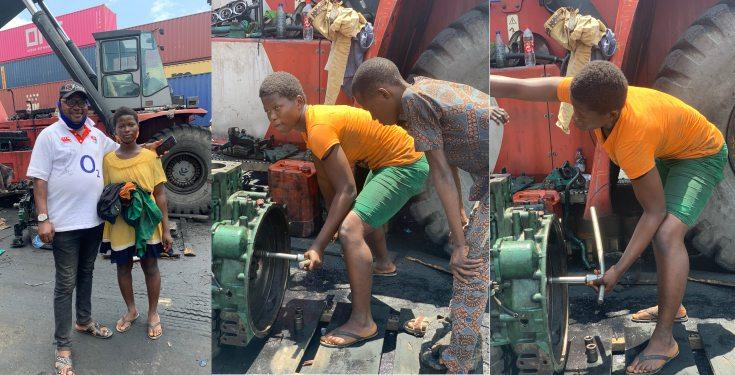 Luck shined on a 17-year-old SS2 student and mechanic apprentice after a video of her fixing a forklift made the rounds on social media gaining so much engagements, even catching the attention of the honorable Minister of Youths and Sports, Sunday Dare, who has promised her scholarship.

Twitter user @thepreciousada shared the video of her father interviewing the girl where he met her learning the craft of repairing a forklift at the Classic Bonded Terminal in Okota, Lagos state.

The girl who is an indigene of Kwara State gave her name as Kehinde Esther, said she wants to study Engineering, and that she is passionate about her craft.

The now viral video caught the attention of Sunday Dare, the Minister of Youths and Sports and he took to his Twitter handle requesting for her personal details; name and number, he also noted that a scholarship will be offered her.

Well, it looks like Esther’s dream of studying Engineering is on its way to becoming real after the Minister’s comment.

Within Nigeria will closely monitor this thread as it develops and keep you updated.

Watch the viral video below:

17 years old girl that went viral after she was seen repairing a forklift and wished to study engineering has been promised Scholarship by Minister of Youths and Sports, Sunday Dare. The 17-year old who gave her name as Kehinde Esther, said she wants to study Engineering. This morning, the video caught the attention of the Minister and he took to his Twitter handle to offer her a scholarship.