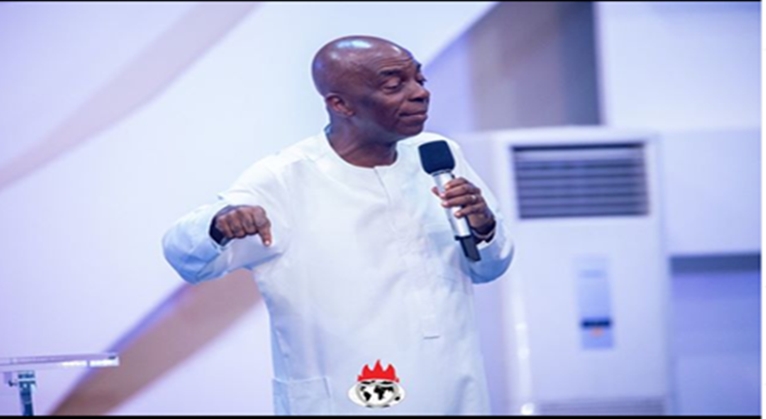 Pastor, David Oyedepo, the presiding Bishop of Living Faith Church Worldwide, has declared that very soon the world will realise that they have been deceived by the Coronavirus outrage as it is a mere noise from hell.

He threw his weight behind the purported discovery of Dr. Stella Immanuel that antimalarial drug, hydroxychloroquine, zinc, and antibacterial drug, Zithromax, were effective cures for the virus.

Oyedepo who spoke at the Covenant Hour of Prayer programme of his church, said that the coronavirus is a mere noise from hell.

“I watched something yesterday on the Frontline Doctors in the US. It’s a noise from hell and there is nothing hidden that is not known by God. Nothing!

“Every positive report contrary to that demonic propaganda is doused, it is not allowed to have expression because of the evil machinations of the perpetrators.

“Now, they will know that God’s greatest interest on the earth are the souls of men and everyone that is out to destroy them, my God will destroy them,” he said.

Oyedepo stated that there there was no week the Church did not have testimony of coronavirus, saying “it’s like fever. There is nothing there, it’s like fever! Evil intentions, evil scheming. What is coronavirus?

“We have found a cure” – they say it is not relevant. They got it off YouTube, got it off all the various platforms just to keep their propaganda going. But I can tell you this, God is in the midst of His people.

“Everyone that is after the souls of men to destroy them, they shall all be destroyed in the name of Jesus Christ.
Whatever they have as intention is falling on their heads, on their families, their generations in the name of Jesus!
If somebody comes out and say we have treated 350 people with this drug and none died, they say, “No, that’s not necessary.”

“So, what’s necessary? To kill them is necessary or to force your demonic vaccines on human race? Who knows what you have inside it? To turn human beings to properties for wealth sake, for political reasons?

“The same way Pharaoh perished because he won’t let people go, these evil men will disappear into shame and ignominy, wherever they may be and whatever forces are behind them. It’s mere noise. The Bible calls it noisome pestilence. It just came with noise, zero. Ebola came, we didn’t shut down.

“Zero. It didn’t make the first 20 of the worst viruses that visited the earth, so what’s the noise about? Well, the world will discover that they have been deceived,” he added.

Oyedepo said he had been saying that before, and that the world would soon discover that they have been grossly deceived, saying “I refuse to be deceived. I refuse forever!”

“Jesus is the resurrection and the life, what is coronavirus that everybody is making nonsense? Noise-making all kinds of demonic money. The good news is, Christ is still strong in the midst of His people. Our rescue is here! Those who won’t let others live, they will not live. Those who want to instill fear for their selfish reasons, my God will deal with them,” he said.