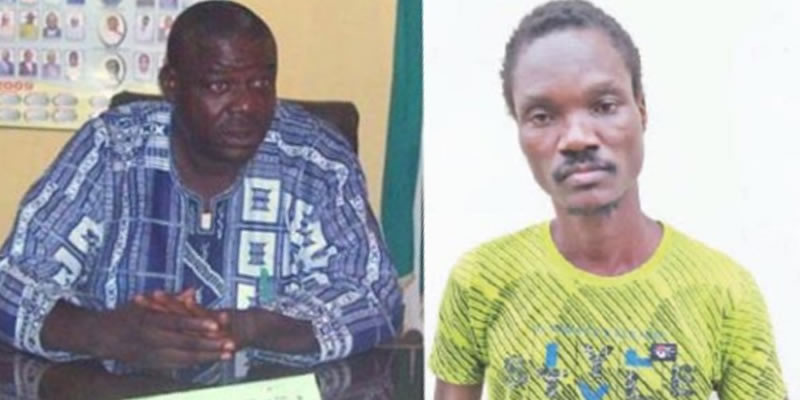 Andrew Ogbeche, an English Education graduate, from University of Calabar (UNICAL), who allegedly facilitated the murder of his boss, Egbe Ediagbonya, a former Commissioner for Sports in Edo State, has been arrested.

On May 16, 2020, Ediagbonya was kidnapped, after his abduction, the kidnappers called, demanding N15 million ransom but later hurriedly collected N1 million.

An hour later after the ransom payment, the kidnappers sent a text message to the family, telling them where to pick his corpse.

Ogbeche, who worked as a labourer on Ediagbonya’s palm tree farm, explained that he got N100,000 out of the N1m.

According to him: “I relocated to Edo after my graduation in 2013 in search of greener pasture. It’s because of financial constraint that I accepted to work as a labourer at the farm of the late commissioner.

He owns a big Palm Oil farm at Okada village and I am one of his workers. The job was so demanding that I had to work twice everyday with about two hours break in-between the shifts.

Despite all these, he could only afford to pay me N10,000 a month. I should have refused that offer but I needed money to feed. I had only worked for two months before I resigned and he is still owing me salary of one month.

I had no plans to kidnap him until I became friends with one Paul and invited him to the farm. It was during one of his visits that he told me of his plans to kidnap my boss.

I disagreed but he threatened to kill me. He later told me that he had kidnapped the man and sent N100,000 to me as my share. But I never knew that they killed the man probably because the commissioner saw his face.”