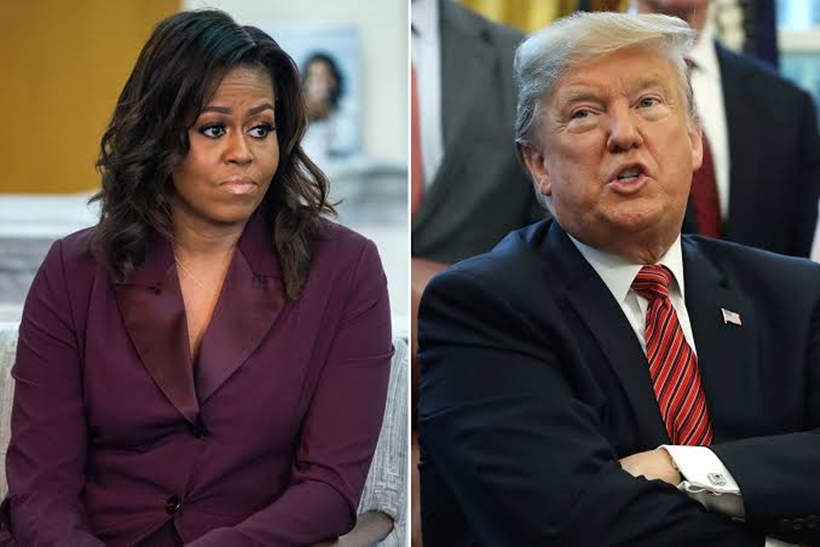 Speaking with NPR’s Michele Norris on episode two of ‘The Michelle Obama Podcast’ on Spotify, she disclosed that her depression is ‘not just because of the quarantine, but because of the racial strife, and just seeing this administration, watching the hypocrisy of it, day in and day out, is dispiriting’ as the nation battled the Coronavirus pandemic.

According to Obama, she has experienced ’emotional highs and lows,’ as she watched the administration’s response to the Covid-19 pandemic, while calling out how ‘exhausting’ and ‘dispiriting’ it is to watch how the President responds or doesn’t respond at all to ‘yet another story’ of a black man or person being hurt or killed.

She said she doesn’t think she is ‘unusual’ in this way, adding: ‘Spiritually, these are not fulfilling times’

To make herself feel better, Michelle revealed she exercises regularly and tries to surround herself with ‘good people’ like her husband and friends.

‘Spiritually, these are not fulfilling times,’ she said in the new episode.

”Save me”- Veteran singer, Baba Fryo cries out for help as…

‘I don’t think I’m unusual, in that,’ she added. ‘But I’d be remiss to say that part of this depression is also a result of what we’re seeing in terms of the protests, the continued racial unrest, that has plagued this country since its birth.

‘I have to say that waking up to the news, waking up to how this administration has or has not responded, waking up to yet another story of a black man or a black person somehow being dehumanized, or hurt or killed, or falsely accused of something, it is exhausting.

‘And it has led to a weight that I haven’t felt in my life, in a while.’

But she added ‘spirit is lifted’ when she feels healthy and surrounds herself with good people, like family and friends.

‘I reach out to my family, and to my friends, even in this time of quarantine. You know, I fought to continue to find a way to stay connected to the people in my life who bring me joy, and my girlfriends, my husband, my kids,’ she said.
‘It’s the small things, small rituals [that make a difference],’ she said.

The former first lady also revealed she learned to stick to a routine while she lived in the White House, but lately it’s been difficult, and it is affecting her sleep.

‘I’m waking up in the middle of the night, ’cause I’m worrying about something or there’s a heaviness,’ she said.

‘I try to make sure I get a workout in, although there have been periods throughout this quarantine, where I just have felt too low.