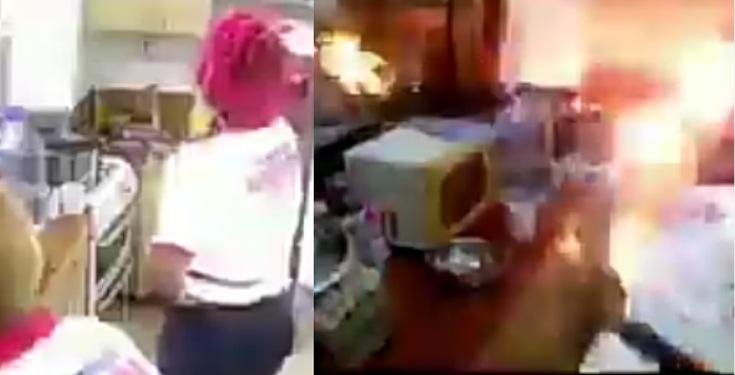 Barely 24 hours after Nigerians mocked Cameroonians over their ongoing Big Brother tagged Biggy234, Twitter NG has again taken to the platform to react as the Cameroonian Big Brother house almost went up in flames.

A video making the rounds on social media has shown the moment gas exploded at Big Brother’s house in Cameroon.

In the video shared, two female housemates could be seen in the kitchen tidying up some things. After a few seconds, one of the girls left the kitchen and suddenly, there was a gas explosion.

Out of fear, the housemates ran out immediately to find the closest escape route. They were spotted in the video scampering for safety after hearing the loud bang.

However, although the incident seemed really serious, fortunately, no life was lost and no housemate was injured.

Big Brother Cameroon when he saw the Fire pic.twitter.com/ki2gP25m49

So in big brother Cameroon you have to catch fire before u would blow…#benefitboys#BBNaijaLockdown
Laycon pic.twitter.com/ZqouyqL9hn

In other gist, Big Brother Naija housemate, Ozo recently had a discussion with Nengi where they aired out their thoughts towards each other.

During the discussion, Nengi talked about Ozo snubbing her for a week and how she made attempts to talk to him to no avail.