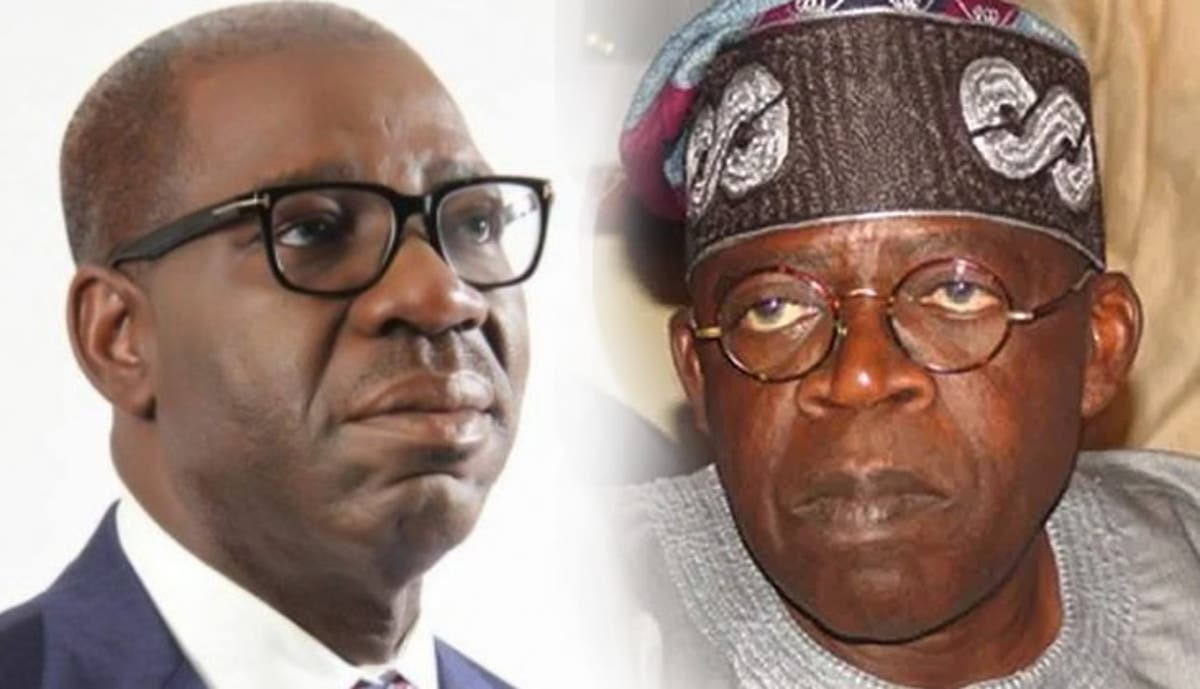 Tinubu to Obaseki: Your tenure of woeful leadership in Edo state will be brought to an end

Following the recent political crisis rocking the Edo state House of Assembly, the National Leader of the All Progressives Congress, (APC) Bola Tinubu has accused the Edo state governor, Godwin Obaseki as the brain and force behind the crisis.

The former governor of Lagos state added that the governor’s woeful leadership in the state will hopefully come to an end soon.

This was contained in a statement which was released on Friday, August 7 and made available to the press.

In the statement, the National leader of the ruling party, APC accused Governor Obaseki of ”making a mockery of Nigeria’s constitution by blocking the timely inauguration of two-thirds of the elected members of the Edo State House of Assembly, and now resorting to the strong-arm tactics of dictators.”

”IN DEFENCE OF CONSTITUTIONAL DEMOCRACY The recent actions of the Governor of Edo State represent the gravest possible assault on constitutional democracy and the rule of law and escalation of violence and tension in the state he purports to govern.

Not satisfied with making a mockery of our constitution by blocking the timely inauguration of two-thirds of the elected members of the Edo State House of Assembly, Governor Obaseki has now resorted to the strong-arm tactics of dictators.

First, he sponsors hoodlums to deface, indeed destroy, parts of the House of Assembly Building in Benin, feigning the building is undergoing renovation. Then, he imports sand and gravels to prevent access to the assembly complex.

In effect, the man has spent state funds to thwart the very apparatus of the state government he was sworn to uphold. He has squandered public money to defeat the very will of the public. This is tragic beyond words.

As a pretext for his refusal to allow the Edo House of Assembly to function, Governor Obaseki’s actions are perverse. This is a cowardly act and a move to thwart representative democracy in Edo.

No renovation has been planned for the state house building. No appropriation was made in the state’s budget. The only reason any renovation could be deemed necessary is the destruction wrought by his own goons.

Governor Obaseki’s governance of Edo State recalls the worst excesses of our military past and represents a direct threat to the democratic order by his refusal to permit duly elected members of the Edo State House of Assembly to perform their constitutional duties.

Governor Obaseki betrayed contempt for the people of his state and, unfortunately, his ignorance of Nigeria’s constitutional order. As a Governor he ought to know better than to obstruct the functioning of his own legislature, but perhaps he is in need of a quick lesson.

Indeed, it is no coincidence that of the three arms of government, the powers of the legislature are enumerated first, in our Constitution.The legislature is the authority imbued with the power to make laws for the peace, order and good governance of the federation and states

Indeed, the Constitution makes clear that a Governor’s role primarily extends to the maintenance and implementation of the laws set down for him by his state’s legislature.

Although Governor Obaseki’s conduct in the past year is undoubtedly impeachable, these legislators have made no threat to impeach the Governor. Their only desire is to peacefully perform the duties asked of them by the constituents who elected them.

The rule of law and preservation of democracy is too important to sacrifice at the altar of any one man’s ambition. Governor Obaseki’s woeful leadership of Edo State will hopefully be brought to an end soon by the very people whose rights he has so carelessly trampled upon.

One can only hope that the damage he is doing to the most important of the state’s democratic institutions can just as easily be repaired.”