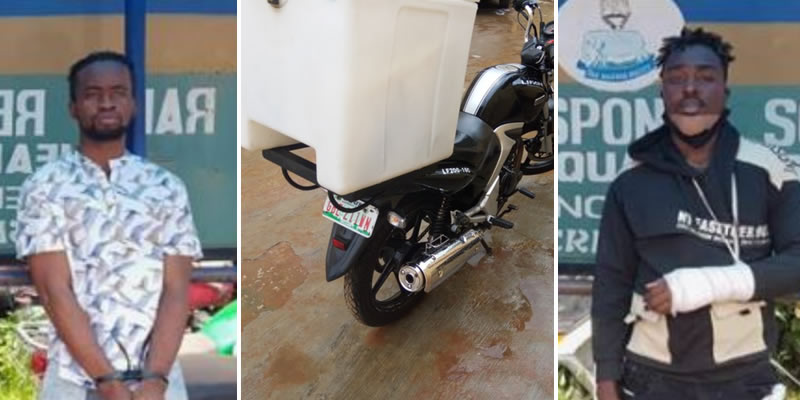 Two entertainers, a musician and a pianist have been remanded at the Kirikiri Correctional Centre, Lagos by an Ikeja Magistrates’ Court for allegedly stealing a cell phone valued at N430,000.

WITHIN NIGERIA recalls that the defendants – Chinonso Michael, 25 years, an Afro-pop singer and Chimelu Victory, 22 years, a pianist – were arrested in June, in the company of 5 other suspects at their residence at 4, Modupe Young Thomas Estate, Ajah, Lagos by the Decoy Team of RRS.

The defendants are being tried for alleged conspiracy and robbery.

The Prosecutor, ASP Bisi Ogunleye, told the court that the defendants and others still at large committed the offences on April 10 at Ajah.

Ogunleye alleged that the defendants robbed the complainant, Mr Abiodun Ojeniyi, a delivery man, of an iPhone worth N430,000.

He said: “The defendants ordered the phone through an online platform through pay-on-delivery policy.

“After the delivery man delivered the phone to the defendants, they took to their heels without paying.

“When they were later arrested, three iPhones, three laptops, two flash drives, two modems, two memory cards and four SIM cards were found on them, which they could not give satisfactory account of.”

Delivering her judgement, Magistrate, Mrs Ejiro Kubeinje refused the plea of the defendants and ordered that they be remanded in custody, pending the advice of the State Director of Public Prosecutions (DPP).

Kubeinje urged the prosecutor to duplicate the case file and send it to the DPP for advice.

She later adjourned the case to September 21 for mention.