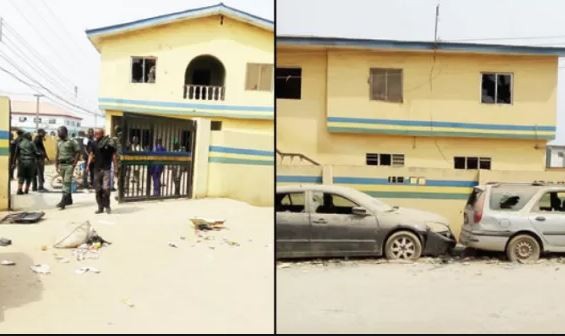 Some irate youths on Friday invaded a police station in Imoru, Ijebu-Ode area of Ogun State.

The youths were seen in a video vandalising and looting the police station.

They were seen destroying the patrol vehicle, as window glasses and doors were broken.

According to the now viral video, it was observed that the youths took advantage of the incident to cart away items from the police station, while daring the officers to come out.

Newmen could not immediately confirm why the youths engaged in the act.

Oyeyemi, while speaking with newsmen on phone, condemned the incident in its entirety, while warning youths against such acts.

“We have warned them that we will no longer tolerate any act of violence against our facility and our men. Because we have had fruitful discussions with most of the youths across the state in the wake of this crisis.

“The incident that triggered this crisis did not happen in Ogun State, so we don’t see any reason somebody will be unleashing violence on our men and attacking our men.

“We have called on traditional rulers and political leaders to warn their children not to participate in any violence that would lead to wanton destruction of property because the command will no longer tolerate that,” Oyeyemi warned.

Asked, the PPRO said none of the policemen in the station sustained any injuries as a result of the incident.