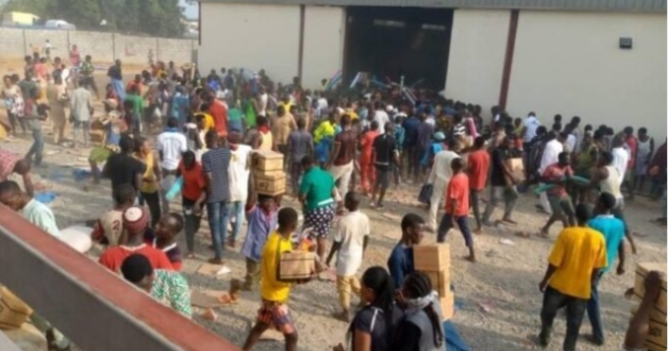 Another warehouse in the federal capital territory (FCT) has been attacked by a mob and supplies said to be COVID-19 palliatives.

WITHIN NIGERIA learnt that the angry residents invaded the warehouse located in Gwagwalada area council about 9am on Monday.

It was further learnt that the FCT administration under the agricultural and rural development secretariat owned the warehouse.

According to report, thousands of bags of grains, including rice as well as cartons of noodles were stored in the warehouse.

Report further revealed that residents and passersby were seen storming out of the building with as much as they could carry — some had just one bag of rice while others loaded up to three bags.

A video of the scene shared on Twitter, the recorder said: “Somebody that just came out now said the things inside are more than enough. The carton of Indomie inside is more than a million.

Only Rivers has not collected COVID-19 palliatives, Sadiya Umar…

“How many persons can finish this? The population of Gwagwalada is not up to a million. This will go round; if you can pick multiple times.”

The mob action comes just days after some individuals attempted to break into a similar facility at Area 10 in the nation’s capital.

Warehouses containing COVID-19 palliatives have been raided in at least seven states, including Lagos where the looting began last week.

The palliatives were donated by CACOVID, a private-sector driven coalition set up to support the federal government’s response to the COVID-19 pandemic.

Some Nigerians accused state governors of hoarding the supplies in an attempt to divert them.

But the states have denied the allegation. Some governors said they were storing the palliatives in case of a second wave of the coronavirus while others said they had started distributing them before they were looted.

BudgIT, a civic technology organisation, said its COVID TRACKA platform revealed that Nigeria received “over N213BN as donations for COVID19 response in cash and in kind”.