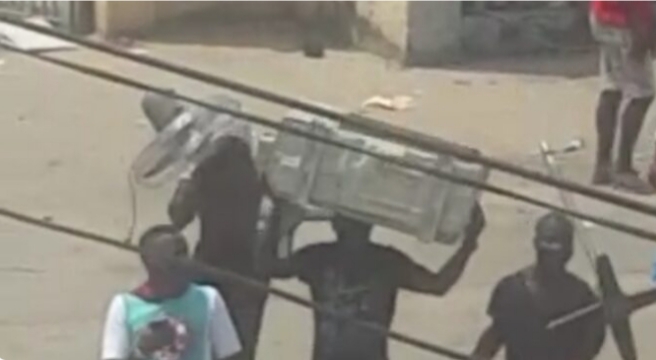 Counsel to Dapo Apara, a former Managing Director of Alpha Beta Consulting, Tade Ipadeola has disclosed that the originating summons filed at Igbosere high court, Lagos against former governor of Lagos state, Bola Tinubu and the company have been burnt.

Recall that WITHIN NIGERIA reported how the Igbosere high court was invaded by hoodlums who carted away files and equipments after vandalising the building.

According to report, the attack on the court happened after suspected hoodlums broke loose in the dying days of the #EndSARS protest.

Dayo Apara, a former Alpha Beta MD had alleged that the company has been diverting bilions of naira from the coffers of the Lagos state government since 2002.

Apara also alleged that Bola Tinubu requested that a 70 percent equity interest be assigned to Olumide Ogunmola and Adegboyega Oyetola, two people said to be his associates.

Reports have it that Adegboyega Oyetola, the incumbent governor of Osun state is Tinubu’s nephew.

One of the claims of Dayo Apara, the former MD of Alpha Beta were his proposal led to the establishment of the company during the period Tinubu was governor of Lagos.

Ipadeola while speaking with PUNCH on Tuesday on the development said they would have to re-file their case again, adding that the registry has now been moved to Ikeja.

“Everything in Igbosere high court got burnt including the registrar’s copy of our application,” the lawyer said.

“In fact, the whole building was burnt to ashes. So, we will have to file again. The registry has been moved to Ikeja.

“We may have to file the case afresh at the Ikeja high court but we have not yet been instructed to do so.”