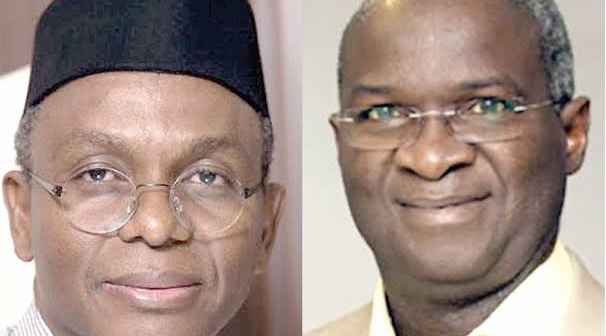 El-Rufai tackles Fashola’s stance on zoning, says it is absurd

The Executive Governor of Kaduna State, Nasir El-Rufai has tackled the stance of works and housing minister, Babatunde Fashola as he kicked against zoning of political leaders.

El-Rufai said no country progresses with such arrangement.

This is coming hours after WITHIN NIGERIA reported that the Minister of Works and Housing, Mr. Babatunde Raji Fashola has strongly advised the leadership of the ruling party, All Progressives Congress (APC) to respect and honor agreement reached at the formative stage of the party ahead of 2023 general elections.

The was disclosed by the Kaduna state governor while speaking at the Nigerian Economic Summit (#NES26) in Abuja.

The governor said every qualified person should be given equal opportunity to contest for political positions.

In Nigeria, political offices — especially the presidency — are rotated on the basis of geographical zones, from the time of Olusegun Obasanjo up till the administration of President Muhamadu Buhari who is from Katsina state.

With the 2023 election roughly two years away, some Nigerians have started clamouring that the presidency should return to the south.

But speaking at a plenary session at the summit on Tuesday, el-Rufai said Nigeria has failed to make serious progress over the years because of the culture of rotating leaders.

The governor, who said leaders should not be selected by zones or political parties as this “will lead to inefficiency”, added that what can be done is “to give every society a framework of equal opportunity to take advantage of and prosper”.

“I do not believe that we should be driven in our politics and economics by distribution whether or not there is a logic behind it,” he said.

“In my honest view, Nigeria went wrong when we focused on distribution rather than production. We like to distribute and it has gone as far as saying that in a state, governorship should rotate; that is absurd.

“There is no country in the world that has made progress in the last 50 years that rotates its leaders. I think if we move away from this fixation about distribution to selecting or picking the best person to get the job done… when the job is done, everybody benefits.

“Right now, we are distributing this and we are not making any progress because the focus is on distribution.”

El-Rufai also said there is the need to have more youth in political offices, faulting a system where the majority young population is governed by “old people like me”.

“We can’t have a country with 90 percent of our population below the age of 40 all ruled by old people like me,” he said.

“We must have young people in government being trained to take over from us.”