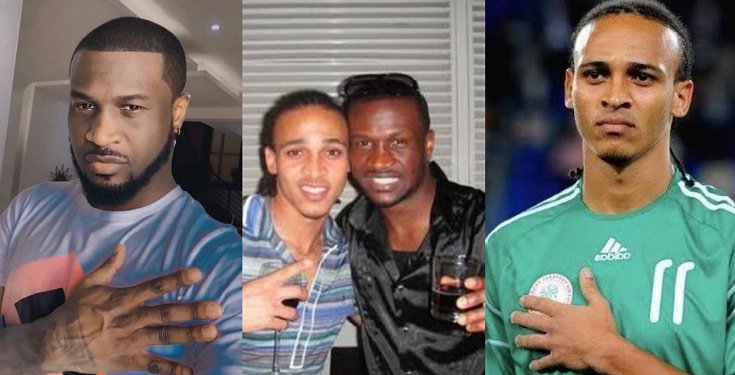 Peter Okoye Fires Back At Odemwingie After He Called Him ‘Fraud’

Peter Okoye, a Nigerian singer from the defunct music duo PSquare, has fired back at his namesake, ‘Peter’ Osaze Odemwingie, a former Nigerian football star, after he (Osaze) called him out and accused him of defrauding people.

The drama started when the former Nigerian striker, Peter Odemwingie, took to his Instagram story to make a negative remark about popular Nigerian singer, Peter Okoye.

“What happened to you @PeterPsquare? you are robbing people in broad day light with that your nonsense business and now you want to take Christmas from them? You no dey fear God at all?”

Sharing an old photo of both of them together while reacting to his claims after the footballer chatted him up, Peter Okoye told him that he wanted to ignore his tirade but couldn’t because he felt disappointed.

Okoye, reacting to Odemwingie’s post, also took to his Instagram story asking his 10 million followers to pray for the footballer as ‘all is definitely not well with him.’

“Bro I tried to ignore, but I am so disappointed in you! If you are now close to God does not make you feel others are close to the devil! I own a registered and licensed lottery platform just like every other individual does both here and abroad.

But coming to spill this rubbish just because you feel you are now closer to God! Bro my music never brought you close to this your God in particular! Bro you have been Brainwashed Period! You look sick and you need help? Learn to mind your business and focus on that your God and your life! DISAPPOINTED.”

In a related development, Odemwingie had earlier called out Amara, wife of Nigeria football legend Nwankwo Kanu, accusing her of sliding into his DM.

Peter Osaze Odemwingie a retired Nigerian professional footballer who played as a forward and winger. He was born in Tashkent, Uzbek SSR, Soviet Union to a Nigerian father (Peter Odemwingie Sr.) and a Russian mother, both of whom were medical students.