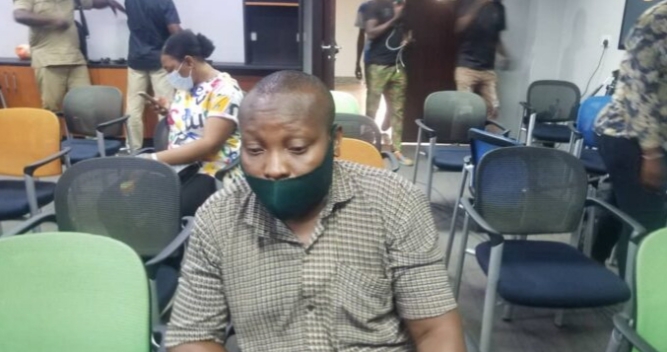 A resident of Lagos, Adebayo Abayomi has accused the police of abandoning his mother’s corpse on the floor of a mortuary after she was allegedly killed by officers.

This was stated by the resident while appearing before the Lagos judicial panel on restitution for victims of SARS and other related abuses on Tuesday.

Led in evidence by Unyime Eyo, his lawyer, Adebayo said he met the corpse of his mother, Kudirat Adebayo, abandoned on the ground in a mortuary after she was allegedly shot at Onipanu area of Lagos.

“I met my mother’s body on the floor. The police didn’t embalm her as they had told me,” he said.

“I’m a motorcycle rider and part-time teacher. On April 4, 2017, I visited my mum where she sells akara (bean cake). I had not taken anything since morning and after eating, I told her she should give me money to sustain and she said 15 mins later, I should come back.

“I was still around the vicinity with my friends, when all of a sudden I heard gunshots. My friend said they’re the SARS men and that there’s a ‘yahoo guy’ who is doing birthday and that maybe they were shooting to scare them away. They normally come there for their ‘stop and search’.

“We were still talking when I received a call from my mother’s younger sister that SARS has injured her. They took her body to Olosan police station. It was when I entered their police station that I saw my mum’s dead body in their vehicle.”

Adebayo, who said he is the eldest son of the deceased, explained that one Isola, the then divisional police officer (DPO) of Olosan police station, informed him that his mother would be embalmed and that officers found culpable would be made to face justice.

“The DPO told me that he has given out money for embalming at the mortuary and that the next day we should come back for further hearing,” he said.

“So, when I got to the station, I visited the IDH mortuary, I met my mother’s body on the floor, swollen. The police didn’t embalm her as they had told me.”

On following up to ensure that the SARS officer who allegedly killed his mother would be apprehended, Adebayo said he was told the officer was on the run and could not be found.

“They told me they saw three out of the four police officers that came to that area that day — that is Prince, Charles, Fabian and one Tboy — and the DPO said he cannot prosecute the three others since they all said it was Charles that fired the shot that killed my mother; that Charles has run away and they can’t find him,” Adebayo added.

He said on April 8, 2017, Fatai Owoseni, the then commissioner of police in Lagos visited his family to commiserate with them, and thereafter assigned the case to one Ibrahim Yusuf, an inspector.

Adebayo claimed that the outcome of the case, as well as the result of the autopsy, has not been disclosed to him or his family members till date.

“They only told me they removed bullet from her body during post mortem, because the IPO denied me access to the mortuary,” he said.

The petitioner alleged that the police was yet to prosecute anyone on the matter, adding that he had written to Akinwunmi Ambode, the immediate past governor of Lagos state, in 2017, as well as the office of the public defender.

WITHIN NIGERIA learnt that the police complaints unit had opened up an investigation into the alleged shooting of Kudirat, but it’s not clear if the case was eventually resolved.

Case of alleged shooting of a female by a policeman at Onipanu/Mushin Lagos via DM is being investigated. Tracking number is #PCRRU251625. pic.twitter.com/DySQgFyYNZ

Adebayo told the panel on Tuesday that he wanted justice, and that the police should compensate the family with N10 million.

The panel adjourned the case till December 12, 2020 for further hearing.