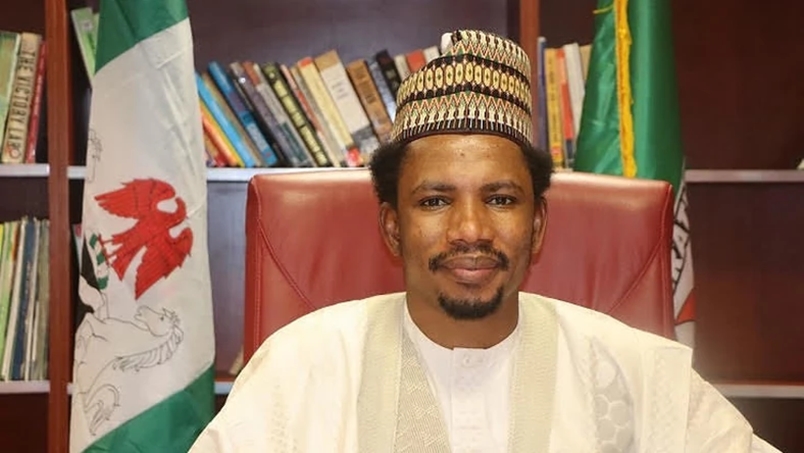 Senator Elisha Abbo (APC, Adamawa North) has reacted after he was caught on tape slapping someone else.

The Adamawa-born senator who was caught on tape In May of 2019, dishing out slaps on a hapless young woman inside a sex toy shop in Abuja, is in the news again for assault.

Abbo has earned for himself a reputation for beating up and slapping people on a whim.

I'm posting this video to trigger y'all afresh.

Watch it knowing that the court has dismissed the case. In other words, no justice. pic.twitter.com/ZVgArGDrkz

A video clip of the senator slapping yet another person in a yet-to-be-ascertained location, has been making the rounds online.

The incident occurred in November of 2020.

“You are very stupid,” the 42-year-old senator can be heard yelling in the clip as tempers flared. Before long, he was raining more slaps on the hapless victim.

The audience was reportedly made up of members of Abbo’s constituency.

Senator Elisha Abbo was caught on Tape assaulting a woman on the 11th of May 2019. He has done it again!! Here is a video of him assaulting another citizen. A serving senator!!! But this is our reality. Our leaders commit the worst of crimes and there are zero consequences!! pic.twitter.com/OgfT6MYz8L

Around the senator who was perched in his car, invectives and cuss words in the local dialect, punctuated the still night air.

Abbo has tried to explain the incident away by saying all he did was disarm a young man who was hell bent on shooting at him if he refused to part with the sum of N2 million.

Abbo and his reps maintain that he acted in self defense and that he was the victim on the night.

A statement sent to newsmen by Abbo’s reps details that the senator “disarmed a man with a pistol made locally, who threatened to shoot him if he did not give him two million Naira before crossing the blocked road.

“On November 13, 2020 at around 2am, the man led dozens of young people and blocked the senator on his way to his cousin’s wedding in Mubi.

“The incident was an attempt on the senator’s life by the man holding the dane gun, unlike a trending video on many social media platforms published with no verification or obtaining the facts; used by the opposition as venom to poison the mind of good people of the nation.”

The senator worries that the spate of unemployment in Nigeria is a “serious problem that must be resolved quickly by the government” before it spirals out of control.

He also blames poverty and other social ills for the “rascally conduct of young people these days.”

“Most of the youths are pushed into this, wasting their talents by doing something bad to the detriment of themselves and the society at large,” Abbo said.

He added that “that young man was deliberate in attacking me with his dane gun. Idleness and poverty are eating deep into the fabric and mental wellbeing of the youth in our society. It is harshly biting them hard and I must try my best to take them out of that mess.

“Come this Saturday, I will go back to my constituency to have a self-sustained empowerment program of millions of naira to help them regain their freedom from poverty.”

The senator has also blamed his political opponents for the circulation of his latest assault video, explaining that he is being antagonized for recently dumping the opposition PDP for the governing APC.

Abbo recently appealed the judgement of a Federal Capital Territory (FCT) High Court which ordered him to pay the sum of N50 million as compensation to Osimibibra Warmate after he assaulted her in that sex toy shop in Abuja a little over a year ago.

The senator argues that the N50 million sum is excessive and a disproportionate penalty for his offence.

Abbo is Nigeria’s youngest senator. A reputation for being a hothead has preceded him since he assumed the position of a federal lawmaker.