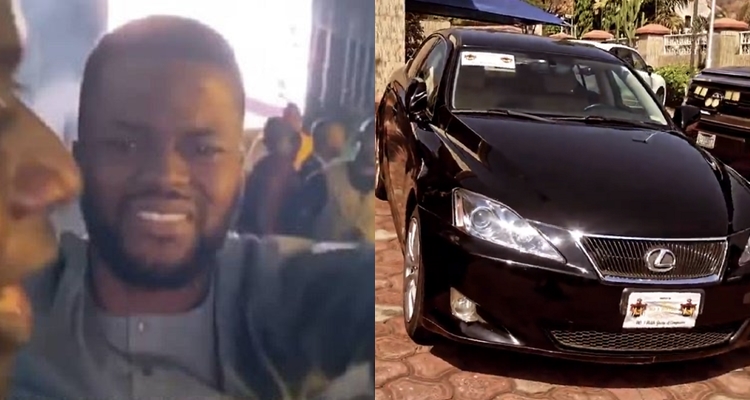 For cab driver, identified as Austin, the wedding of Deola Smart and Olusola Awujoola will forever be a memorable event, because it was the day he won a brand new Lexus car as a souvenir.

Within Nigeria had reported how Deola, daughter of Smart Adeyemi, a senator representing Kogi west senatorial district, tied the knot with Olusola, better known as Malivelihood, in Abuja.

Few hours into the event, the new couple had taken to their individual social media pages to announce their plan to give out the car as a souvenir for their marriage.

Austin, a fresh graduate of accounting from the University of Abuja, was said to have conveyed a yet-to-be-revealed guest to the venue and was thereafter invited into the hall.

And somehow ended up leaving the wedding with a Lexus car in his name and 3.5million naira contributed to him pic.twitter.com/ub6LXl0erX

During the wedding reception, Austin was among those who came out for a “question and answer” contest which was a prerequisite for winning the car.

The fresh graduate was declared the winner after beating other contestants and thereafter presented with the keys to the Lexus car.

The development was followed by donations for Austin from individuals at the event including the couple, who were said to have donated N1 million. A total of N3.5 million was said to have been raised at the end of the exercise.

Uber driver ends up with a Lexus car and N3.5million after he took a passenger to Malivelihood‘s wedding today in Abuja pic.twitter.com/I3eTuTxJIQ

In an interactive session with the MC, Austin, who is from Kogi state, revealed that he is currently waiting to be deployed for the mandatory National Youth Service Corps (NYSC) programme.