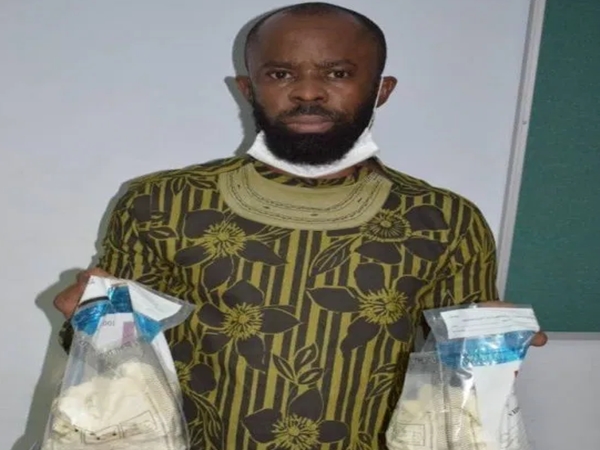 Brazil-based Elechi, home for wedding in January, arrested with cocaine in Abuja

The National Drug Law Enforcement Agency (NDLEA) has arrested a Nigerian, Kingsley Adendu Elechi, for being in possession of 7.2kg of Cocaine in cellophane bags.

Elechi who had spent the last 13 years in Brazil, flew into the country on Monday to prepare for his wedding scheduled for January. But he will no longer be able to prepare or even attend the wedding, as he was arrested at the Nnamdi Azikiwe Airport.

Elechi, 39, who arrived on Ethiopian Airline flight ET 911, flew in with a cargo of cocaine in cellophane bags.

He was intercepted by officials of the National Drug Law Enforcement Agency (NDLEA).

Inside Elechi’s bag were 12 parcels of cellophane wrappers, containing white substances and weighing 7.2kg. All tested positive to cocaine.

In a statement, NDLEA spokesman Jonah Achema said Elechi is an indigene of Umulolo Local Government Area of Imo State.

The suspect said he would not blame anybody for his cocaine trafficking.

Elechi said he was promised N3 million as his fee upon safe delivery of the drugs to someone in Nigeria.