by Ashimedua Adebiyi
in Entertainment
Reading Time: 1 min read
0 0
A A
0

Singer, Wizkid’s baby mama, Jada Pollock has opened up on how she met the Nigerian afrobeat star and became his manager.

The music enthusiast and artist manager said she met Wizkid in the year 2012. That same period, she was managing American based singer, Chris Bown.

She added that it has been an incredible journey and she is blessed to have work with incredible talents such as Wizkid because.

Also, she is thankful of her journey in showbiz because she is in full blossom of her career. 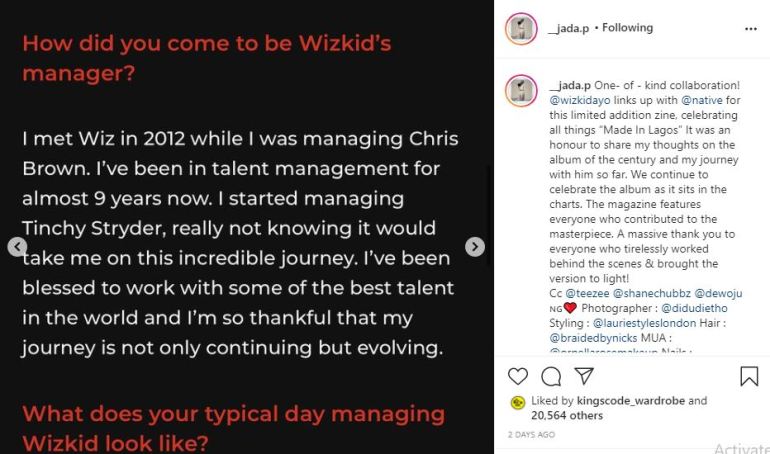 In other news,  Wizkid’s album “Made In Lagos” has set a new record as the album becomes highest-charting album by a Nigerian in US iTunes history.

American OAP, Mike Adam disclosed this in a recent tweet he made via his official Twitter handle.

He revealed that Made in Lagos has become the highest-charting album by a Nigerian artiste in US iTunes history, peaking at number 3. Read more here.

VIDEO: Airport staff nabbed after stealing from travelers in Ghana

Iyabo Ojo’s daughter, Priscilla apologizes to her for hitting the strip club to celebrate her birthday