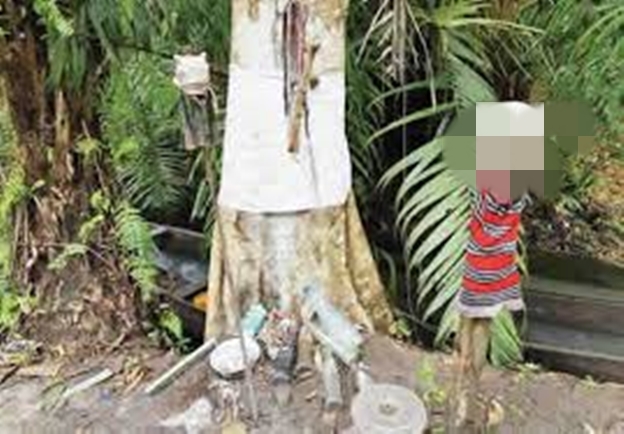 A 45-year-old fish seller,  Mrs. Memunat Ayinde’s head has been discovered in the shrine of a herbalist identified as Dosu Sunday after she was declared missing since October 1.

Memunat and a commercial motorcyclist, Ibikunle Ajose, who was conveying her to the place where she bought fish, were both declared missing over 12 weeks ago when there was no trace of their whereabouts.

The incident was reported at the Ado-Odo Divisional Headquarters, but transferred to the Anti-kidnapping unit of the State Criminal Investigation and Intelligence Department (SCIID) to unravel the mystery behind their disappearance.

Following intelligence gathering, one of the suspects, Okediran Monsuru, was traced to Badagry in Lagos State and apprehended. His arrest gave away three others, namely Ajaoba Monday, Akewusola Wajud and Nupo Pona, who were subsequently nabbed.

The quartet confessed that they worked for a notorious land grabber, who they identified as” Lebo.”

The suspects said they accosted the woman and the commercial motorcyclist on the road at Abisoye village, abducted them, took them to an uncompleted building in a bushy area, tied them and later called their principal on the phone to come for their ‘catch’.

Police spokesman Abimbola Oyeyemi said the five suspects, Okediran Monsuru, Ajaoba Monday, Akewusola Wajud, Nupo Pona and Dasu Sunday are in their custody, while a manhunt has been launched for their fleeing principal, “Lebo”.