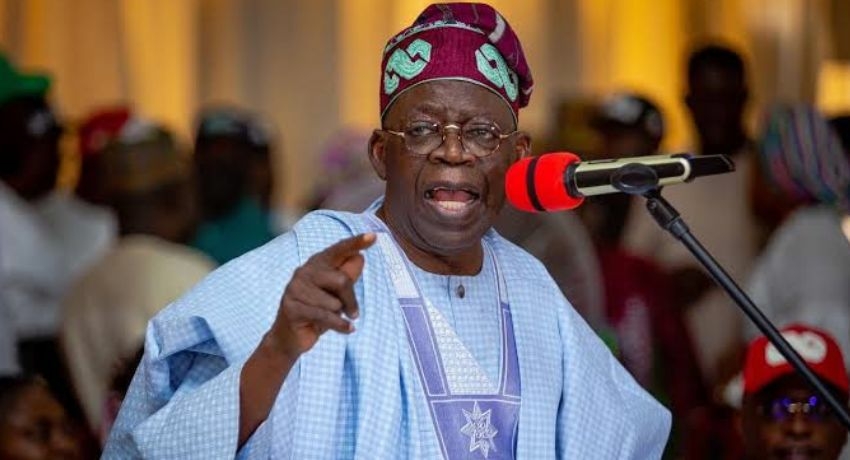 The presidential candidate of the All Progressives Congress (APC), Bola Ahmed Tinubu has sparked reactions after making another slip-up at his political rally in Lagos State.

On Saturday, 26th November, APC held a rally for its presidential candidate, Tinubu and his vice, Senator Kashim Shettima at the Teslim Balogun Stadium Surulere in Lagos State.

The rally was tagged the ‘Mother of all rallies’. Some of the dignitaries present at the rally include Lagos Stae Governor, Babajide Sanwo-Olu, ex-Governor of Lagos, Babatunde Raji Fashola, Speaker of the House of Representatives, Femi Gbajabiamila among others.

During his speech, Tinubu urged the electorate to use their Permanent Voter Card, PVC; however, in the process of pronouncing PVC, the 70-year-old who has been committing blunders in previous rallies said ‘APV’.

Nigerians have taken to social media to react to yet another blunder by Tinubu. While many joked and said he has been giving back-to-back content like skitmakers, others opined that he may have dementia. See video and reactions below:

@marko wrote: APV: Acquire a Provisional Visa. Baba dey tell us to run away before him enter office o. Because e no go funny.

@jamalmorgan wrote: He probably is having dementia

@austinseiko wrote: And some werey werey werey will still see all this mistakes and want to vote for him? Numbers of votes he gets shows how daft they’re.

@rayshell wrote: This man and steady talking In the rubbish

@princess_uti wrote: This man jus dey drop hit back 2 back

@taiye wrote:This one go confuse Nigeria if he becomes president

@bukola wrote: Do you love meeeee?

@ekamzyalways wrote: This man need better oraimo cord for that him neck.

@fabricsbyaduke wrote: God is giving us signs sha but we will still do ourselves Reply Send

@ademidun wrote: Until something do this man? They should take care of him now

@oluwaseteminire wrote: Baba just dey drop hits back to back

WITHIN NIGERIA recalls Tinubu mistakenly prayed for the opposition, the People’s Democratic Party (PDP) instead of his own party, APC during a presidential rally flag-off in Jos. Tinubu said:

Another incident on Thursday, November 17 at a townhall meeting in Imo state left many shocked as well.

It happened that while Tinubu outlined his plans for Nigeria if he gets elected, he was seen struggling to pronounce an unknown word.

Speculations are Tinubu was trying to pronounce the word ‘hullabaloo’. See video here.

Bola Ahmed Tinubu has been one of the aspirants who has generated more controversies ranging from his age to alleged involvement in fraud and drug trafficking.