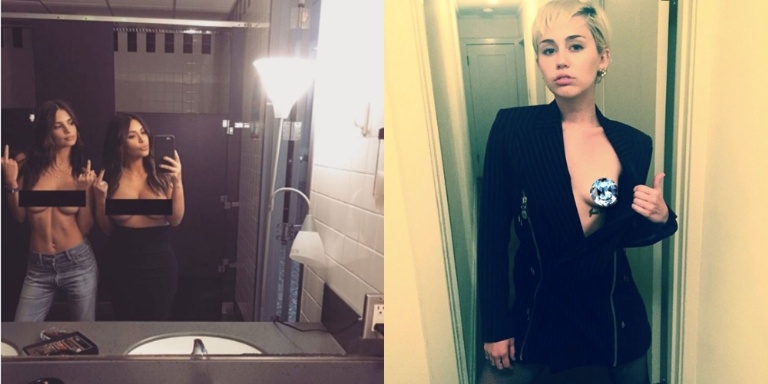 Despite continuous protests from the #FreeTheNipple community, Instagram has yet to revisit their community guidelines they set up back in 2015 that say women’s nipples are not allowed on the website with the exception of “post-mastectomy scarring and women actively breastfeeding.” This ban on women’s nipples but not men’s, reinforces the idea that women’s bodies are inherently more sexual, sexualized, and basically obscene than men’s.

So, Genderless_Nipples is an Instagram account that’s throwing Instagram’s anti-nip policy right back in its face. The account posts closeup pics of nipples of all shapes, sizes, and colors, with short-and-sweet captions, celebrating the awesomeness that are nipples — regardless of gender. The account’s bio reads “Men are allowed to show their nipples, women’s get banned. Support ALL genders! Let’s change this policy!”

My nipple isn't sexual, your thoughts are. 🤘🏼💫

I will respect your opinion as long as it doesn't disrespect anyone else's existence. ⭐️💫🌟

We are all born so beautiful. The tragedy is being convinced we are not. -rupi kaur 💫

Why would anyone be offended by their own anatomy? ⭐️

People of quality do not fear equality. 🙌🌸💥

The account’s creators, Morgan-Lee Wagner, Evelyne Wyss, and Marco Russo told The Huffington Post that, “no matter people’s gender, everybody should be treated equally.” “We are not against the rules,” they continued, “but we think rules should be applied to all genders equally.”

Of course, with any powerful and bold message comes the haters. The group’s original account, GenderlessNipples, was hacked, and deleted:

Whoever you are: 🖕 Continuing the revolution here people! 🙌❤️🤘🏼💥

That didn’t stop Wagner, Wyss, and Russo from restarting their Nipple equality campaign with a new account. Now, they’re inviting anyone who’s down to free their nips to email their anonymous nipples to [email protected] to continue the fight against Instagram’s sexist double-standards.

10 Absolutely Insane Gifts for His Penis

HYSTERECTOMY: Actress Nse Ikpe-Etim opens up on blocking husband, healing and moving on