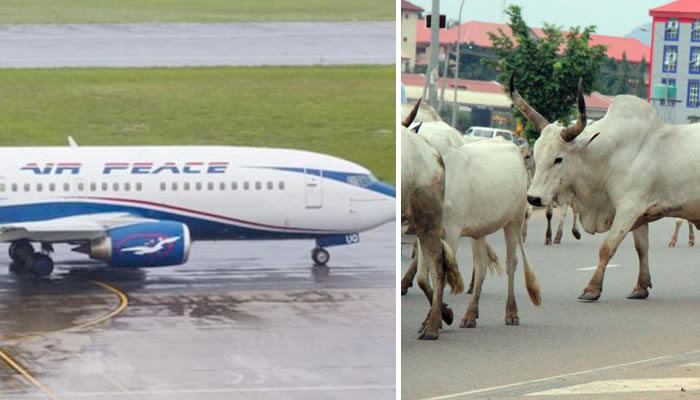 A herd of cows yesterday invaded the runway of the Akure Airport, preventing an Air Peace plane from landing for more than 15 minutes.

Flight P4 7002 from Lagos was preparing to land at about 12.15pm when the pilot sighted the animals on the runway.

The cows had wandered from surrounding fields and bush where they were foraging for grass.

The pilot, Captain Inyang, apparently alerted the control tower which, in turn, passed the information to the security personnel of the Federal Airports Authority of Nigeria.

The security officials swiftly cleared the animals off the runway to enable the plane land, seven minutes after schedule.

A witness to the drama, Governor Ayodele Fayose of neighbouring Ekiti State, took to the social media to express his disgust at the development.

Writing on his Twitter handle, Fayose said: “Today, while at the Akure Airport to board Air Peace commercial flight to Lagos, I witnessed cows taking over the Airport runway and preventing Aircraft No. 5NBQQ from landing for more than 15 minutes. Thanks to Capt Inyang for saving the lives of the passengers.”

Reacting to the development, the Federal Airports Authority of Nigeria, in a press release yesterday, “apologised to Air Peace Airlines and our esteemed passengers for a runway incursion incident that prevented an Akure airport bound flight from landing for some minutes.

The release signed by Mrs. Henrietta Yakubu, the General Manager, Corporate Affairs, said the Air Peace flight, which left Lagos for Akure could not land immediately as some cows had strayed into the runway of the airport.

She explained that “however, normalcy was restored quickly, as officers of the aviation security department quickly dispersed the cows from the runway and the aircraft was cleared for landing.

“The Authority will like to assure travellers and the general public that efforts are already ongoing to close the gap that aided this incident,” she said, adding that “FAAN is committed to our core values of safety, security and comfort.”