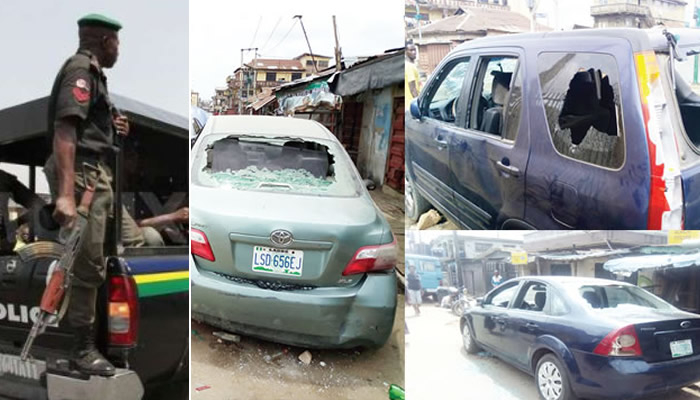 Tthe police command denied the allegations, saying hoodlums resisting police arrest damaged the vehicles with stones. But residents who spoke to Newsmen on Thursday alleged that the operatives aside from damaging vehicles parked by the roadsides, also entered into mechanic workshops and destroyed the cars they found there.

At least 40 generators belonging to residents were allegedly taken away by the policemen, whom residents claimed wanted to avenge the death of a police sergeant, Abam Mohammed, who was killed during a shootout with drug dealers.

It was earlier reported that a drug dealer had taken delivery of hemp valued at N7m on Monday.

On Tuesday, a police team from the Area D Command, acting on intelligence, stormed the community and recovered the hemp.

Hoodlums and some residents allegedly attacked the policemen with broken bottles and stones, as the operatives retreated and returned with reinforcements.

In a shootout that ensued between the two sides, the police sergeant and three others were killed.

On Wednesday, some residents alleged that policemen invaded their streets, looted property and damaged their vehicles.

When our correspondent visited the area on Thursday, the residents lamented their loss.

A trader on Alhaji Lasisi Street, Kike Ajiboye, who sold drinks, said her car was vandalised and three coolers of drinks emptied.

She said, “My car is my moble shop. I use it to sell drinks at parties. The policemen, who were in uniforms, came in around 7.30pm on Wednesday. There were many trucks. I was surprised when they started breaking windscreens. They vandalised my car and took all the wines in three coolers. After they emptied my coolers, they punctured the four tryes. The money I made that day, which was in the car, was stolen.

“I took my goods on credit from LAPO (microfinance bank). How do I pay back over N100,000? There is an armoured tank and a police patrol van at the junction and I thought that would guarantee our safety. They threw bottles at us because they knew we were watching from inside.”

Another trader, Mrs Adebisi Adetula, alleged that the cops damaged her Ford car and ruined her family business.

She said, “We could not come out. My Ford car that was destroyed was my family’s means of livelihood. My son, who graduated four years ago, uses it to supply gas in the neighbourhood. Now, what will he use?”

A transport worker, Taofik Ojedele, whose bus was vandalised, claimed that he saw the policemen with knives with which they punctured vehicle tyres.

A food seller on Elegba Street, Jelila Kareem, showed our correspondent her store, which she alleged was razed by the cops.

“As we were trying to put out the fire, they chased us away with guns. Everything was burnt,” she added.

Jimoh, who said he was initially arrested by the policemen, alleged that they broke into a workshop where he kept some of the cars and damaged them.

“They were more than 200. They were broke into houses and took property. They came to my house and arrested me as well. They broke the fence of my workshop and damaged the four cars there. I don’t know what to tell the owners of the cars. I am in serious debt,” he added.

He said many residents took away their cars because the policemen threatened to return.

A trader on Amodu Street, Bintu Rosulu, alleged that her noodles shop was burgled, saying drinks and phones were taken away.

An 80-year-old woman, Alhaja Rabiu Titilayo, said her house door was broken down by the policemen around 9pm.

“When they came in, I told them not to take away my grandchildren who were taking care of me. They asked me to sit down. They collected my torchlight and some phones in the house. One of the children they arrested was released after we paid N8,000,” she added.

Some other residents on Amodu Street claimed that the policemen broke the doors and carted away bags of rice and money they made from sales.

“They took away my bag of rice,” a housewife, Shakirat Abdulsalam, said.

A woman who had a provision store on Anuoluwapo Street, Mrs. Raheem Mariam, said the policemen took bottles of drink in the three freezers in the shop.

A home video shop beside her, owned by her son, was reportedly vandalised as well.

“They took toothpastes, canned fish, eggs and drinks. They opened the video shop with an axe and took phones and power banks,” she said.

A landlord on the street, Folorunsho Oladele, who claimed to be ill, said the operatives hit him with the butts of their guns.

“They were saying, ‘Na you kill police.’ There were three of them. They beat me up and collected the N25,000 I wanted to use for a surgical operation. They spent about two hours on the street,” he added.

The head of a branch of the Christ Apostolic Church in the area, Pastor Joshua Oluwagbemi, said a service was on in the church when the operatives stormed the street.

He said he ended the service and was left with a few members.

He said, “The policemen came in and asked what we were doing. I told them we were in a church. They shouted at me to close the door. Suddenly, they started shooting outside. They turned off my generator. Next, they smashed the windscreens of vehicles on the whole street. They didn’t take anything from my car. They only damaged the windscreen and side glasses.”

A food seller, Mrs. Akiyode Iyabo, said the policemen took away seven phones from the shop, adding that all the money made from the day’s sales was taken.

“My brother was about to turn off the generator when they held him. They beat him to a pulp and took all the phones in the canteen. Aside from the money we realised from sales that they took, they collected about N70,000 meant for a daily contribution. The policemen were in uniform and were heavily armed,” she said.

A resident, Oluwadamilare Adele, said a car he bought in December was damaged.

Two other traders said pieces of meat and bottles of wine were taken from their shops by the cops.

It was learnt that a resident was shot and was taken away by the policemen.

A man claimed that his wife, Taiye Amodu, was arrested in the house, while a mechanic, Taiwo Hassan, was arrested shortly after he returned from work.

Our correspondent also saw a bet shop and a barber’s that were vandalised.

The cops allegedly entered into the adjoining shop of the bet centre by breaking the wall.

A resident said, “More than 200 vehicles were vandalised on the streets. Many people have taken away their cars because the policemen said they were coming back.”

He said hoodlums, while resisting arrest and throwing stones at the police team, broke the windscreens.

He said, “The Commissioner of Police, Lagos State, Edgal Imohimi, on Thursday paraded the 255 suspects arrested during the raid on Akala-Mushin and Idi-Oro areas of Lagos State.

“The raid on criminal hideouts in these areas became pertinent because of the brazen nature criminals living among the people attack residents and law enforcement officers.

“Sequel to this, the CP ordered a raid on identified criminal enclaves in Akala-Mushin and Idi-Oro. During the raid, the criminal elements resisted the police by hurling stones and different types of missiles at them, breaking windscreens of some vehicles parked by the roadside.

“This did not deter the police from arresting 255 suspects, comprising 246 males and nine females, and seizing 39 big bags of weed, suspected to be Indian hemp, and recovering two pump-action rifles and ammunition.

“The CP vowed that the command would not rest until drug peddlers, cult members and armed criminals are rid from the streets of Lagos. The command advises parents, guardians and stakeholders to warn their children and wards to stay off criminal enclaves and avoid mingling with criminals. The CP added that the raid would continue in all places identified by police intelligence unit as black spots.”

He said investigation into the case had been concluded and all the suspects had been charged to court.