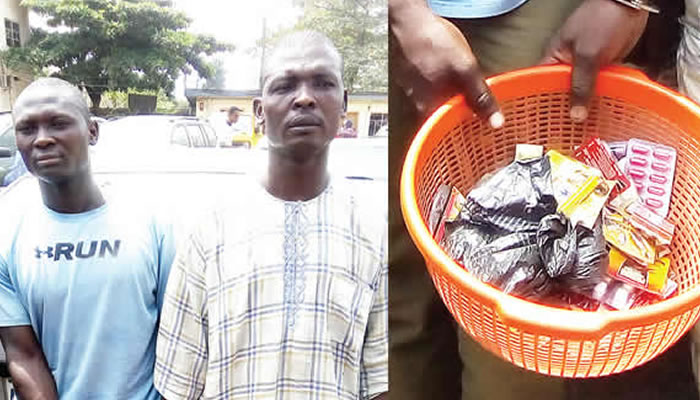 A 45-year-old man, Sheu Ibrahim, and his son, Farooq, 22, have been arrested for allegedly selling Tramadol and Tramol to primary and secondary school pupils in the Itire area of Lagos State.

The suspects were picked up on Friday by operatives of the Rapid Response Squad of the Lagos State Police Command after some officials of the state’s Office of Education and Quality Assurance, Ministry of Education, reportedly alerted the police to the use of drug in schools.

It was learnt that the suspects had a kiosk at Adedeji bus stop, Itire, where they sold the stimulants to the pupils.

It was said that the officials, while on routine monitoring of schools around the area, got a report on the strange behaviour of some pupils.

Investigations reportedly led to the arrest of the dealers.

Seventy two pieces of Tramadol capsules, 28 tablets of Tramol and some other capsules were recovered from the suspects.

They were paraded on Monday at the command headquarters in Ikeja by the state Commissioner of Police, Edgal Imohimi.

Ibrahim, who hails from Kebbi State, owned up to peddling the drugs, but denied selling them to schoolchildren.

He said, “I don’t sell drugs to pupils. I have a shop at Adedeji bus stop, Itire. It is adults I sell to. I don’t take the drugs to schools. I sell six packs of Tramadol every day.”

His son, Farooq, stated that a primary school pupil had once come to the shop to buy Tramadol, but said he did not sell it to him.

He said, “My father usually sells the drugs to adults. A primary school pupil came to our shop to buy Tramadol, but I didn’t sell it to him. I don’t know whether my father sold to the boy when I was not around.”

The CP urged parents and school authorities to be more vigilant and always observe behavioural change in pupils.

He advised parents to identify with their children in order to notice change of behaviour, including slurred speech and withdrawal syndrome, which were effects of drugs.

He said, “Based on information received that pupils of some primary and secondary schools in Lagos are suspected to be indulging in hard drugs, decoy operatives from the RRS of the command, in collaboration with the government ministry, located the schools and interviewed the pupils.

“This led to the arrest of Farooq Ibrahim and Sheu Ibrahim, who have been selling Tramadol – a highly addictive stimulant – to the underage pupils. The suspects will be charged to court and diligently prosecuted.”

The gang, according to the police boss, comprised members from Lagos and Kaduna states.

They allegedly took cars stolen in Lagos to Kaduna for sales.

Tramadol, cannabis influenced us to kill our boss, daughter — Guards

303 cartons of of smuggled Tramadol intercepted in Kano State

Drugs popularly known as ‘Suck And Die’, many others recovered from dealers in Kano