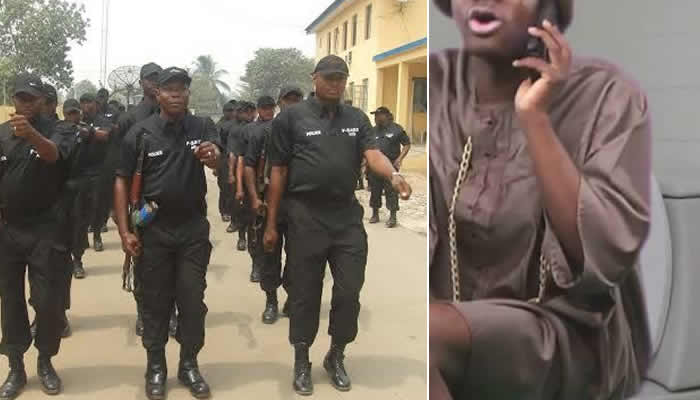 A businessman, Immanuel Ibe-Anyanwu, created a sensation on Monday after calling for help on Facebook while in the toilet of a Zenith Bank branch at Ago Palace-Way, Okota, Lagos State.

Ibe-Anyanwu claimed that some operatives of the Special Anti-Robbery Squad were waiting outside the bank to extort money from him.

The 37-year-old, in the post, claimed that the policemen had seized his company documents.

While urging his friends and other readers to share the post, he said his phone battery was running low.

The post had been shared by over 400 social media users in five hours, as many Nigerians rallied support for him.

The victim, who later spoke to newsmen on the telephone, said he stayed in the toilet for over two hours.

He claimed that the operatives, who waited patiently for him, later removed the number plate of his car in a desperate bid to extort money from him.

Narrating his ordeal, he said, “I was coming out of the banking hall after a transaction around 2pm on Monday when a man in mufti approached me. He said he was a policeman. I asked for his ID card, which he showed me. He told me to follow him to where their vehicle was parked.

“They were seven in number in a mini-bus. They were all armed, except the driver. Immediately we got there, he told his colleagues that I was trying to snatch his ID card from him. I was shocked. I wanted to explain, but they asked me to shut up.

“They went through my company documents. They saw that the address of my company was at Ikoyi and asked what I was doing at Okota. I told them that I came for a banking transaction. They asked why I didn’t do it at Ikoyi and I replied that I lived in Okota and that I left my house late and wanted to do the transaction before going to the office.

The victim said he suggested that they meet with his landlady or speak with his office workers on the telephone, but the policemen refused.

He noted that he called the spokesperson for the Lagos State Police Command, SP Chike Oti, who asked to speak with the operatives.

Ibe-Anyanwu said after he handed over the phone to the officials, they cut off the call and seized the phone.

He explained that a resident later mediated and asked the policemen to release him.

“They said because of the man that begged for me they would release me. They called me aside and asked me to arrange some money for them. I told them that I needed my phone to arrange the money. They returned my phone.

“I went into the bank and sneaked into the toilet where I wrote the Facebook post. I called the police spokesperson again to inform him that they had just released my phone and were demanding money. He told me not to give them anything. He said he had mobilised some officers and they were coming to rescue me.

“I was in the toilet till 4pm and thought by then they would have left; but they stayed. Later, the bank workers asked me to leave their premises. By then, my phone battery was flat and I could not call anybody. By the time I peeped outside, I saw they had removed my car’s number plate,” he added.

The businessman said he had “swiftly” entered the car and turned on the ignition to leave the premises when the policemen surfaced and blocked his path with their vehicle.

He explained that he refused their call to wind down the glass, adding that a crowd gathered around the scene.

Ibe-Anyanwu said the policemen dropped his number plate and drove out to wait for him outside the bank.

“The bank asked me to leave their premises. I was confused. I decided to risk it and speed out. That was how I escaped. Although I can recognise them, they don’t have any name tag. They only had their crested guns with SARS jacket,” he added.

The state Police Public Relations Officer, Oti, in a statement, said the policemen had been identified.

He added that the state Commissioner of Police, Edgal Imohimi, had ordered their arrest and trial.

He said, “On sighting the X-Squad personnel of the command, the erring policemen hurriedly left the scene in a manner suggestive that they were on an illegal duty.

“The Lagos CP directed the Officer-in-Charge of the X-Squad Section to fish out the policemen within two hours. That directive was actualised with the identification of the policemen involved. They were led in that inglorious duty by one Inspector Jude Akhoyemta, attached to FSARS Ikeja. The CP has ordered their arrest and as soon as that is done, the public will be notified.”