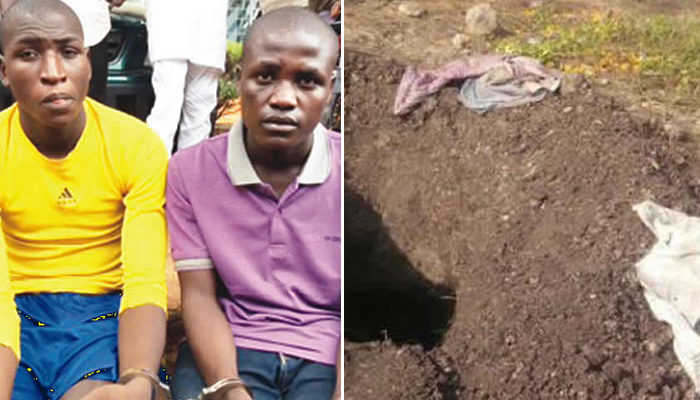 20-year-old kill pregnant girlfriend, buries her in shallow grave after cheating on him

The Plateau State Police Command has arrested a commercial motorcycle rider, Stephen Gyang, for allegedly killing his girlfriend, Alice Samuel, and burying her remains in a shallow grave.

Gyang allegedly killed the victim for wanting to force her pregnancy on him. The 20-year-old Junior Secondary School two dropout said he killed his girlfriend because she had initially said he was not responsible for the pregnancy.

He said she recanted on the prompting of her mother, who wanted him to take responsibility for the pregnancy.

The incident happened in Tahoss village, in the Riyom Local Government Area of Plateau State.

The state Commissioner of Police, Undie Adie, said it was a case of “culpable homicide”, adding that the suspect had confessed to the crime and would soon be charged to court.

Gyang, an okada rider, told newsmen that he reported the matter to his elder brother because he lost his peace after the incident.

He said, “Yes, Alice Samuel was my girlfriend and we had been together for some time now. I killed her because of the pregnancy. After saying the pregnancy was not for me, she recanted and said it was mine; that was why I killed her. I decided to bury her that night in a shallow grave that was to be used either for a pit toilet or well.

“After the incident, the spirit of Alice Samuel did not leave me; she started disturbing me and I had to report to my brother who took the matter to my father. My father thereafter reported my predicament to the village chief.”

His friend and accomplice, 20-year-old Kelly James, who was an eyewitness, told our correspondent that he begged Gyang not to kill the victim, but he refused.

He claimed that the prime suspect threatened to kill him if he (James) did not assist him.

James said, “I had been seeing him and the girl together for over three years now. He is my friend and the two of us are commercial motorcyclists. On that particular day, I had gone to see his girlfriend, who sold palm wine. After taking palm wine at her shop, I went to my friend’s house. When I discovered that he was not at home, I picked the house key where he usually kept it, opened the door and slept off in his room.

“When he returned home at night, he was not happy that I entered his house without informing him of my visit. While I was asleep, I heard a knock on the window and he informed me it was his girlfriend, Alice.

“When I asked him what brought the girl by that time of the night, he said she came to see him. He opened the back door for her and they started having a discussion behind the curtains.

“He called me outside that the girl had implicated him over a pregnancy which did not belong to him. He insisted that the girl’s mother asked her to do so. I told him that since he had accepted the pregnancy and the case was already in the palace of the village chief, he should allow her to be with her parents for now.

“But he said no, that he was going to deal with the girl by killing her. I advised him against it, warning that if he killed Alice, we would not be friends again. But he refused.

“I left him outside and went into the room. I started trembling on the bed as I feared the worst. He was talking to the girl and I thought he had decided against killing her.

“Suddenly, I heard the sound of two legs on the ground, which suggested that she was struggling for life. I stood up and saw that he held the girl’s neck to the wall; he had strangled her and her eyes were already white. As I told him to leave the girl, he threatened to kill me if I did not assist him to cover up.”