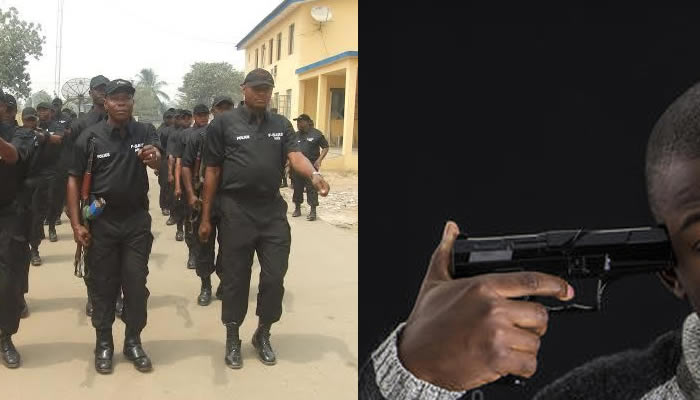 Agholor, who was the Officer-in-Charge of the Special Anti-Robbery Squad, Enugu State Police Command, reportedly shot himself in the head.

Sources close to the deceased told newsmen that the family could not explain the reason for his action as he had no history of depression.

Our correspondent learnt that Agholor had called his eldest daughter last Thursday and handed over the keys to his two houses to her.

He was said to have gone to the back of one of the buildings and shot himself in the head.

The ex-cop died on the spot.

One of the sources disclosed to newsmen that the deceased’s family members had noticed that he was behaving strangely a day to the incident.

The source said Agholor insisted that nothing was wrong with him when he was questioned.

He added that there was shock in the neighbourhood the following day when news broke that he had killed himself.

The source said, “He started behaving unusually on Wednesday evening. When they asked him what was wrong with him, he said he was okay. When he woke up on Thursday, he went to his wife’s bedroom to greet her.

“Afterwards, he had a bath and dressed up. He looked corporate. They asked him where he was going to, but he did not talk. He called his first daughter and handed over the keys to his houses to her. He has two houses on a plot of land. He and his family members lived in one of the houses.

Another source said Agholor had received some strange telephone calls two days before the incident, adding that the suicide had thrown the family into grief.

He said, “He was a retired police officer and a former OC SARS, Enugu State Police Command. I learnt that he had received some strange calls before that Wednesday when his behaviour changed. It was very pathetic.

“He was living fine with his family and did not show any sign of depression all these while. Why he killed himself is still a mystery to everyone. His family members are mourning. It is a sad incident they will not want to share with outsiders. It was reported at the Agbado Police Station.”

He said the corpse of the retired officer had been deposited in a morgue, adding that investigations had commenced to determine the circumstances that led to the incident.

He said, “His daughter reported at the station that he shot himself in the head while he was in the living room. The scene of the incident was visited and photographed by policemen.

“It is a case of suicide and the command is investigating to know what made him to take that decision. He was a former OC SARS in Enugu.”