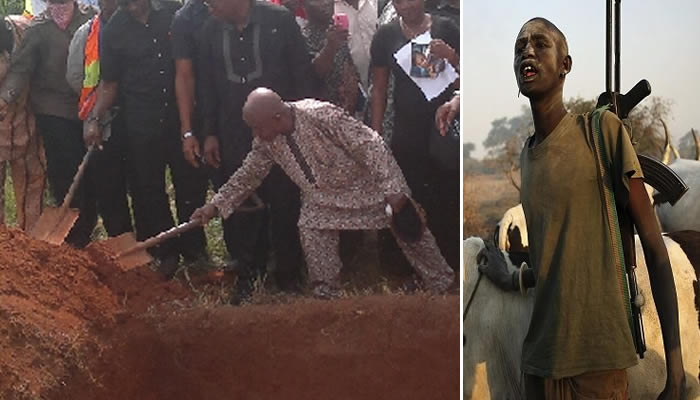 Seven of the slain Tivs were buried at the Christian cemetery in Lafia, the Nasarawa State capital, while the remaining 10 were interred in a mass grave at Keana, headquarters of Keana Local Government Area of the state.

Our correspondent, who visited Dalhatu Araf Specialist Hospital, Lafia on Wednesday, observed the corpses of the slain operatives.

Speaking to journalists, the President of Tiv Youth Organisation in Nasarawa, Peter Ahemba, explained that the leadership of the Tiv community in the state had no option but to bury the victims outside their ancestral homes against the Tiv tradition and custom “because the attackers are still unleashing mayhem on Tiv communities.”

He said, “We were left with no option but to bury the victims outside their communities because the Tiv villages have all been sacked and the invaders have become landlords, occupying most of them; so, we could not risk more lives in going to bury the victims in their ancestral homes as demanded by our (Tiv) tradition and custom.

“This is more so that the corpses had already started decomposing at the Dalhatu Araf Specialist Hospital, Lafia, owing to congestion at the mortuary.”

He stated that apart from those buried on Wednesday, other victims had earlier been buried at different locations across Awe, Keana, Obi and Doma Local Government Areas of the state, noting that the search for the recovery of more bodies was ongoing in the affected communities.

Our correspondent observed that many fleeing Tiv villagers were stranded in the streets of Lafia, the state capital.