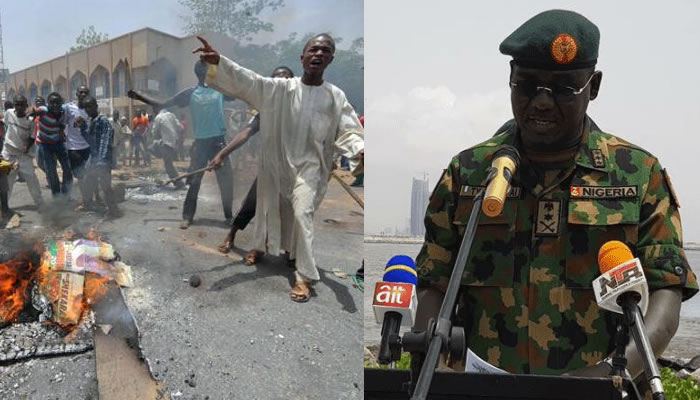 Group hails Nigerian Army, Buratai over commitments to end killings in the country

A pressure group, the Middle Belt Rights Congress (MBRC) has described as highly commendable the sacrifices of the Nigerian Army to rise above various distractions and unnecessary comments to tackle the incessant killings in the country, especially in the middle belt region.

The group also commended the Chief of Army staff, Lt. Gen. Tukur Buratai for his on the spot visits to remote communities in Benue and Adamawa States, saying such action has indeed served as morale booster to the  troops across the various operational units.

Addressing journalists in Makurdi, the Benue State capital, Secretary General of the group,  Moses Ogaba Ochapa, said the successes being recorded by the army are crucial to ensuring that the entire country does not get plunged into the chaos that comes with food crisis since many farming communities are unable to plant crops while demented killers rampage through the land.

According to him, this is the reason why the army must be encouraged to sustain the tempo of capturing the troublers of Nigeria’s peace and bring them to justice.

He said, “The latest breakthrough is the arrest of a militia herdsman, Idi Gemu by troops of 72 Special Forces Battalion deployed in operation MESA while on patrol to Adagu village in Guma Local Government Area of Benue.

“The Army earlier arrested the Coordinator, Benue State Livestock Guards, Aliyu Teshaku, who was revealed to be a Boko Haram operative and was coordinating all the attacks in Benue and environs based on political influence and conspiracy . Three other militia herdsmen have also been arrested and weapons recovered.

These efforts have invariably changed the tempo in all ramifications.”

He said it is pleasing that these arrests and disruption of the killing network are being achieved while troops continue to act within acceptable rules of engagement for such operations.

He said, “The Middle Belt Rights Congress (MBRC) commends the Nigerian Army for rising above the distractions and unnecessary comments to embrace professionalism that has yielded the arrests of these high-profile killers and criminals. There is a remarkable improvement since the Army was drafted on ground and we are appreciative of the sacrifices.

We commend the Chief of Army Staff, Lt. Gen. Tukur Yusufu Buratai for being steadfast and not losing focus even amidst the barrage of attacks on the selfless Nigerian  Army by people who do not want the killings in Benue and other states around it to end.

“We however urge the Nigerian Army to  sustain the tempo of capturing the troublers of Nigeria’s peace and bring them to justice.  This is because we realize that several interests will contrive means of throwing the Nigerian Army and the COAS off balance so that they can buy time for the hired assassins to recover from the devastating blows that have been dealt on them. But for us, rather than allowing these perverted people to recover to the point of relaunching themselves, the arrest of these very high profile criminal elements should be taken  as clear indications that the end of Herdsmen/Farmers Crisis is near.

“We commend Gen. Buratai for making it a duty in line with his tradition, to visit the troops in Benue State as happened recently. His visit is a pointer to the fleeing criminal elements that despite the provocation to destroy the good relationship between the Army and the people, the Army has remained committed to protecting lives and properties without looking back.”

He explained that going after the sponsors and the political components of those that have flooded the Middle Belt with blood is the only way to turn the tap off grief and misery off at the source.