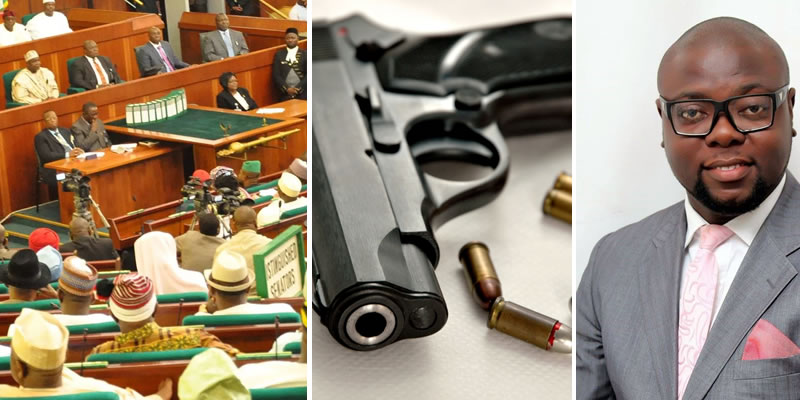 Hon. Dipo Olorunrinu, a member of the state House of Assembly has been arrested by police in Lagos for alleged unlawful possession of arms and ammunition.

The Lawmaker was apprehended after two guns were recovered from two suspects identified as Wale Oye and Ganiyu Ajiboluwa who allegedly confessed to have collected the arms from Hon. Dipo Olorunrinu.

The Police Public Relations Officer in the state, CSP Chike Oti, in a statement on Saturday, said the firearms were intercepted in the FESTAC area of the state by operatives of the Inspector-General of Police X-Squad.

Oti explained that the team was on patrol to mop up illegal firearms following the expiration of the licence given to individuals in possession of guns and the directive to the affected persons to surrender them to the police.

The statement read, “The Lagos State Police Command wishes to inform members of the public that the resolve of the Force to mop up illegal and prohibited firearms in the hands of those who failed to take advantage of the grace period offered by the Inspector-General of Police to surrender their guns at police formations nearest to them has yielded positive results following the arrests of three persons in possession of prohibited firearms.

“The suspects, namely Wale Oye, 37; and Ganiyu Ajiboluwa, 47, were arrested on July 12, 2018 at about 1745hrs by a team of the Inspector-General of Police X-Squad operatives on patrol along the FESTAC Extension, by Apple Junction, Amuwo Odofin.”

“However, during interrogation, the suspects claimed the guns were given to them by one Hon. Dipo Olorunrinu, 47, a member of the Peoples Democratic Party in the Lagos State House of Assembly, to escort him to a political rally.

“The honourable member was arrested and he admitted ownership of the guns. To further prove that the weapons are his, he produced expired licences dated 2015 and 2016 respectively. He, however, could not justify his refusal to surrender the guns during the window period offered by the IG in the last nationwide mop-up of illegal firearms and ammunition exercise,” the statement added.

READ: Truck loaded with 200,000 bullets intercepted on its way to Onitsha

Oti said the command would make further findings on the case known to the public as investigation continues.

He noted that the state Commissioner of Police, Edgal Imohimi, promised to rid the state of illegal and prohibited firearms, adding that a special task force would soon embark on a house-to-house search for illicit guns.