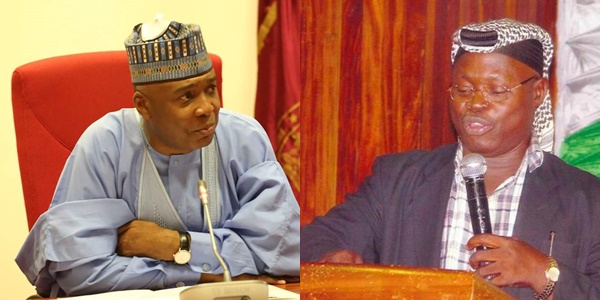 The Muslim Rights Concern, MURIC has called on Senate President Bukola Saraki to resign from his position as continued stay in the office is “immoral.”

MURIC made the call on Thursday.

Addressing a World Press Conference on Wednesday, Mr Saraki argued that he would remain in office until two-thirds of the Senate vote against him.

Dismissing Mr Saraki’s position, the group posited that the “Senate President lost the moral right to remain in office the moment he defected to the opposition party.”

In a statement signed by its Director, Professor Ishaq Akintola, MURIC said, “Saraki’s hypothesis is only workable if there is a working agreement between the ruling party and the opposition. It will then be a coalition.

“Such coalition is formed in advanced democracies in the interest of the nation. But the situation is different here. The ruling party and the opposition are locked in a cut-throat struggle characteristic of a bolekaja political culture.

“Saraki is heating up the polity. It is a reflection of acute poverty of statesmanship in the National Assembly (NASS). The Senate president knows very well that it is the grass that suffers when two elephants fight but he does not seem to care.

“Nigerians can whistle for their dinner as far as he is concerned. Our lawmakers have turned the citizenry into pawns in their political chess game.

“But the Nigerian ship of state is drifting courtesy of Saraki’s political gymnastics. We can only single out a few individual leaders as the little choice in a whole basket of rotten apples and President Muhammadu Buhari stands out as the gem in the collection.

“Development projects are being held up. 2018 budget was delayed for a monumental seven month period. It has never happened before. It appears that the intention is to shut down government and make the people suffer.

“The Senate president and his supporters in the red chamber are not thinking of Nigeria and the poor masses. They are holding Nigeria by the jugular.

“We plead with these people to do a rethink. No country can make any progress in the absence of political stability. So where is our patriotism? Where is our sense of honour? Governments come and go but the administration is a continuum.

“Regimes rise and fall but nations continue to develop. Leaders emerge and go into oblivion but the people’s welfare moves from one level to the next. The opposition may be powerful but that must not be allowed to affect projects, programmes and policies designed to improve the welfare of the citizens.

“Even the theory of separation of powers does not entertain the luxury of each arm of government working at cross-purposes. But this is what has been happening since the inception of this administration.

“Certain lawmakers loyal to the opposition manipulated legislative technicalities to hijack leadership positions in the legislature. This was done while pretending to belong to the ruling party.

“These usurped positions were consistently used to obstruct the smooth running of government and to arm-twist the executive in the past three years. These same people eventually decamped to the opposition party after sabotaging government’s efforts at improving the lives of Nigerians.

“This is what Nigerians in particular and the international community in general needs to understand about Nigeria’s peculiar case at present. The world must know where the present NASS is coming from. Its leadership emerged in highly controversial and questionable circumstances.

“Our concern as a human rights organization is not the promotion of any political party but to articulate the extent to which the actions or inactions of those to whom the fate of the citizenry was entrusted impacted upon the lives of our people.

“Lawmakers have the right to belong to political parties of their choice but they also have a duty to facilitate the drafting of policies capable of raising the standard of living among the citizens.

“Unfortunately for us in Nigeria, the reverse has been the case in the past three years. Instead of moving the country forward, the leadership of the NASS has been a cog in the wheel of progress.

“MURIC strongly believes that the Senate president has a moral obligation to resign his position since he has decamped to the opposition party. This is more so particularly in view of the fact that more evidence has emerged showing that he cannot enjoy a smooth working relationship with the executive.

“Yesterday’s siege on the NASS has proved beyond any reasonable doubt that there is no mutual trust between the executive and the legislature. In saner climes, the legislature may disagree with the executive but this is restricted to political issues and developmental projects are not truncated.”

While rounding off, the group argued that the leadership of the National Assembly has allowed political differences to endanger the people’s welfare programmes, and called on the Senate President to show some level of patriotism.

“He should allow peace to reign so that Nigeria can make progress. The only way out is for him to resign with immediate effect. We invite the international community to situate the siege on the NASS within the context of the Nigerian condition. Conscienceless power in the NASS is subjugating the executive’s powerless conscience via the bastardization of the true principles of democracy,” MURIC said.