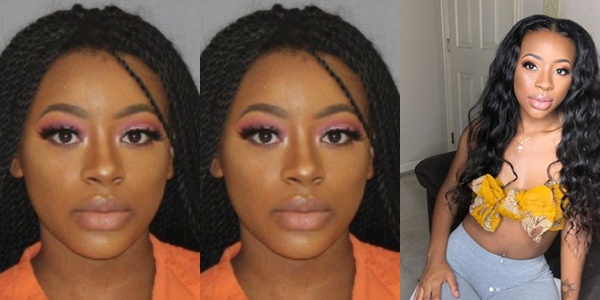 A mugshot is going viral after a flurry of Twitter users have requested a makeup tutorial from the alleged criminal.

Wrapping up a Facebook Live from her dorm room where she was recording her makeup routine, friends asked the student to hang out later that evening.

Finding two grams of the drug, the 19-year-old was arrested and spent the night in Hunt County Jail. The following morning, her mugshot was on the Greenville police Facebook page.

Embarrassed by the mugshot, Perkins admitted she lied whenever someone brought up the photo claiming the woman pictured wasn’t her.

It wasn’t until the image re-surfaced months later when a Twitter user retweeted Mugshot Baes, calling for a makeup tutorial, that Perkins went viral.

With 280,000 likes and 61,000 retweets the 19-year-old’s flawless makeup application was gaining popularity online.

Admitting she always wanted to be a makeup artist, Perkins told the Star-Telegram she decided to capitalise on the attention and start a YouTube and Instagram account.

“When I started reading the comments I was like, besides me being in jail people are really noticing my talent and what I can do,” she said.