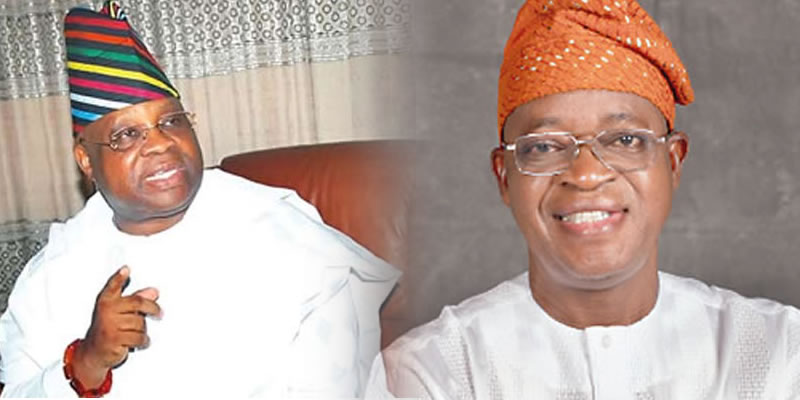 The Independent National Electoral Commission declared the candidate of the All Progressives Congress, Gboyega Oyetola, as the Governor-elect of Osun State.

The rerun of the Osun State governorship election was held in seven polling units across four council areas on Thursday with the candidate of the All Progressives Congress, Gboyega Oyetola, beating the Peoples Democratic Party candidate, Ademola Adeleke.

The returning officer, Prof. Joseph Fuwape, declared that the APC candidate, Oyetola, won the governorship election by scoring a total number of 255,505 votes while Adeleke of the PDP polled 255,023 votes.

The governorship candidate of the Peoples Democratic Party in Osun State, Senator Ademola Adeleke, has vowed to retrieve his ‘stolen mandate’ from Alhaji Gboyega Oyetola of the All Progressives Congress at the election petition tribunal.

Adeleke said this while speaking in an interview with journalists shortly before the final figure was announced by the Returning Officer, Prof. Joseph Fuwape, on Thursday.

The PDP candidate, who spoke through his brother, Dele Adeleke, said he would meet with the party leadership and tribunal would be the next step for the party and the candidate to take.

LAUTECH: Now that the chain is broken, Oyetola and his counterpart,…

He said, “It will be foolish to allow this 419 result to stand. The party will meet and I believe that the tribunal is the next step to take.

“Adeleke’s mandate can’t be stolen, it will be retrieved. The wish of the people will stand at the end.”

However, the All Progressives Congress has said the PDP is crying foul over the result of the Osun State governorship rerun election because of the inability of the opposition party to rig the poll.

The APC said this in a statement issued on Thursday by its Director of Publicity, Research and Strategy in Osun State, Mr Kunle Oyatomi.

Speaking in the statement released after the rerun poll which was held in seven units, the APC spokesperson said that the opposition party made an elaborate arrangement to rig the poll but were prevented from carrying out the act.

He said, “Osun people have spoken. The PDP was unable to manipulate the result this time around, so they are crying foul. We have always known and have made ourselves clear before the election that the PDP had made elaborate arrangements to rig the election through the manipulation of the card readers and it was this process that made them got the votes allocated to them in the first ballot.

“Nobody expected the PDP to even come second. Most people in Osun have the belief that it would be a straight fight between the APC and SDP. But as God would have it, Osun was saved from the vultures.

“We will like the Osun people to understand that the runoff votes went the way it did because the PDP was unable to manipulate the card readers this time around and fortunately the police thwarted their plot of vote-buying and trying to use the PVCs of unsuspecting voters. That was why some of their leaders were arrested. So the PDP should look for other excuses.

“They attempted to win by fraud; they failed in the first round and eventually lost the rerun election.”