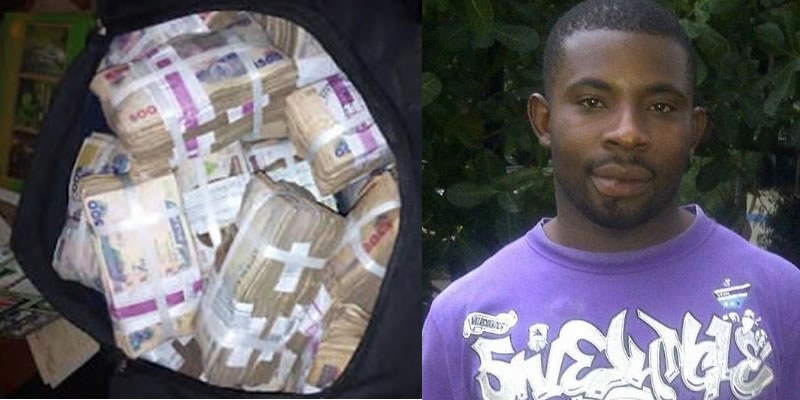 Delta houseboy bolt with employer’s ₦1.7million one week after employment

According to reports, the houseboy, Gabriel told the gate man he was going to buy a CD player from the market and he never returned.

His madam came home and wondered how someone that just came to Asaba would know his way around. She called his number several times and he never picked up. That was when she noticed his bag was not in his room and she ran to check her room and realized he has taken every penny in the house’.

Sharing a the full story of what happened, his madam Ezenwa .J. took to Instagram say, ‘on the 24th of September 2018, this man started working as a steward in my house in Asaba. On Saturday the 29th of September 2018 I just left my house for 10 minutes to drop my husband at his office which wasn’t far from home’.

I returned home and couldn’t find the steward Mr Gabriel Boniface, I asked my gate man and he told me Gabriel said he was going to the market to buy a CD player. I was shocked because he just got to Asaba few days ago and wouldn’t know his way around. I called his phone several times he didn’t pick up, I wasn’t comfortable so I went to his room.

His bag wasn’t in the room and I quickly ran to my room to check if everything was intact but my fear came alive as I couldn’t find the money that was kept in my drawer (4000 US dollars and 300k Naira) the money my husband was supposed to travel to China with. I have reported to the police in Asaba and they are out there looking for him.

Please anyone that has seen him or knows Mr Gabriel Boniface should please report him to the nearest police station and please call 0814 656 0570 I went on Facebook to search for his name and I was able to find him there and got his pictures. Bobo Gabriel on Facebook and his Ig handle is @gabrielboniface1014 he has a sister called Ebu Theresa on Facebook and ig too.

Please help us track this thief in the name of a steward down before he commits same crime again. He is a criminal and should be caught.