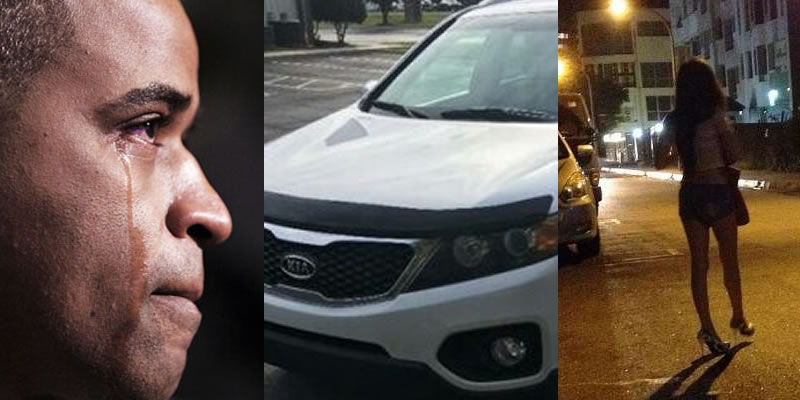 The driver of the chairman of an outsourcing firm located on Awolowo Road, Ikoyi, Lagos State, is in trouble after a sex worker allegedly fled with his boss’ Kia Sorento sports utility vehicle valued at N5.4m.

The prostitute who has been identified only as Nina, reportedly fled with the vehicle at a filling station in Ikoyi immediately the driver, Victor Dossa, came down to fuel it.

According to PUNCH,  Dossa, who lives on Ikoyi Crescent, usually took the vehicle to his house after taking his boss home at the close of work.

It was gathered that Dossa drove the vehicle to Obalende around 11pm to convey Nina to his house, perhaps to have fun together overnight.

Our correspondent learnt that as they were returning home, Nina drove the vehicle and suggested that they stopped at a nearby filling station to buy fuel.

While Dossa came down from the vehicle to monitor how the fuel being bought was being dispensed, Nina zoomed off.

The case was said to have been reported to the police at the Onikan Police Division and the driver was arrested.

Dossa, who hails from Benin Republic, reportedly told the police that he first met Nina in the Obalende area a week before the incident.

He said, “I was brought to Nigeria in 2004 by the company chairman. I work with him as a driver in charge of the Kia Sorento SUV with the number plate, BDG 644 BJ. Whenever I closed from work, I parked the vehicle in my house. The following day, I would go and pick my boss from his house to the office.

“My boss did not come to the office on August 17, 2018, so the vehicle was in my house throughout. Around 11pm, I drove it to Obalende to pick a sex worker whom I met a week earlier. I only know her as Nina.

“On our way back to my house, she drove the vehicle while I was at the front passenger seat. She stopped at a filling station along Awolowo Road to buy fuel. She gave money to pay for the fuel. The moment I came down from the vehicle, she zoomed off. I don’t know how to locate her. I don’t know any of her friends either.”

Dossa was subsequently brought before an Igbosere Magistrate’s Court by a police prosecutor, Sergeant Francisca Job, on two counts of conspiracy and stealing.

The charges read, “That you, Victor Dossa and one other at large, on August 17, 2018, around 11pm, along Awolowo Road, Ikoyi, in the Eti-Osa Local Government Area, within the Lagos Magisterial District, did conspire to commit felony, to wit, stealing, thereby committing an offence punishable under Section 411 of the Criminal Law of Lagos State, Nigeria, 2015.”

The defendant pleaded not guilty to the charges and elected to summary trial.

He was granted bail by the presiding magistrate, Y.O. Aro-Lambo, in the sum of N1m with two sureties in like sum.

The case was adjourned till September 26, 2018 for mention. Another interesting story; I stole car to raise money for marriage —Suspect