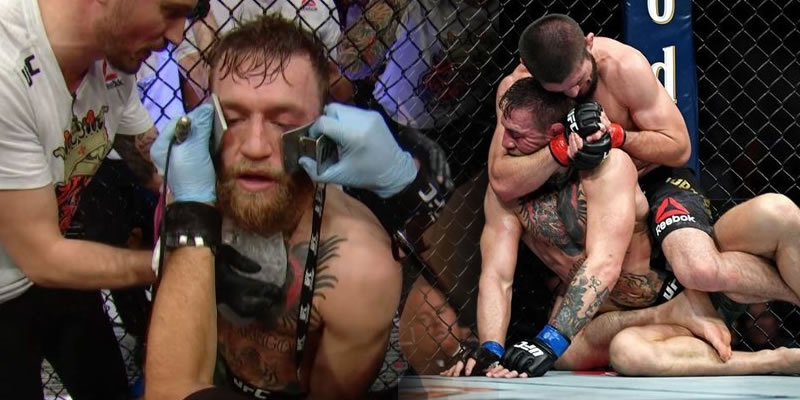 Khabib Nurmagomedov defeated Conor McGregor in an epic UFC 229 bout making the Irishman tap out, he then jumped out of the octagon to attack Conor’s team.

The biggest fight in UFC history ended in astonishing circumstances and chaos as Khabib Nurmagomedov defeated the ‘Notorious’ Conor McGregor before leaping over the cage in T-Mobile Arena, sparking a mass brawl.

His target was McGregor’s team-mate Dillon Danis who also fought back in the ensuing fracas. As the brawl raged outside the ring, one of Khabib’s entourage also jumped the cage to punch McGregor in the back of the head.

Khabib was the better fighter, dominating Conor in basically every facet of the fight at UFC 229 that took place at the T-Mobile Arena in Las Vegas, Nevada.

He ultimately choked Conor out in the 4th round and once Conor tapped, Khabib appeared to spit on Conor and then jumped outside of the cage and attacked Conor’s team.

Both fighters were escorted from the stage without a belt presentation or interviews before Khabib was eventually declared by Bruce Buffer as the winner.

The Nevada State Athletic commission have withheld Khabib’s $2million pay-check after reviewing footage of the ugly scenes but decided to award McGregor’s $3million.

READ: “No Peace Between Us”- Colin McGregor Tells Floyd Mayweather

Recall that Conor and his band of thugs attacked Khabib’s bus at the Barclay’s Center in Brooklyn back in April  after an incident between Khabib and Conor’s teammate Artem Lobov. Back then Conor famously threw a steel dolly at the bus while trying to provoke Khabib to step outside and fight.

Conor was arrested for the attack and Khabib said if Conor wanted to fight, “send me the location.”