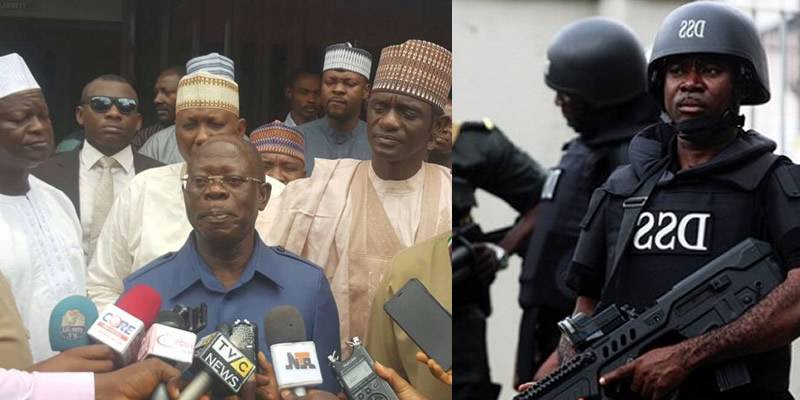 For eight hours last Sunday, the National Chairman of the All Progressives Congress (APC), Comrade Adams Oshiomhole, was held hostage at the Department of State Security Service (DSS) at the behest of some governors and some forces in the party to force him to resign.

Oshiomhole, however, stood his ground and rebuffed the pressure mounted on him to resign. He told the DSS that he committed no crime and would therefore not resign, no matter the intimidation.

Although the APC chairman was caught unawares, he maintained his stand even when DSS officials tried to invoke the name of President Muhammadu Buhari.

He pointedly told them that the President was in the know of all that happened during the APC primaries and that it was their collective resolve not to allow imposition of candidates by anybody, no matter his status in the party.

It later turned out that some security operatives had plotted Oshiomhole’s resignation with about six APC governors.

The plot to lay ambush for him was hatched by the affected governors in connivance with some powerful forces who were aggrieved over the outcome of the recent primaries of the APC.

The governors are from Southwest, Northcentral, Southeast and Northwest.

Four of them are angry with the party for not allowing them to impose their favourites as the party’s candidates in their states.

The Northcentral governor is up in arms with Oshiomhole for insisting on direct primary.

There were insinuations that some former APC elements in the Peoples Democratic Party (PDP) gave tacit backing to the plot by the APC governors in order to render the party weak ahead of the presidential campaign beginning from November 18.

It was gathered that the plotters knew that the APC national chairman was due for a private visit abroad, hence they opted to seal his fate before the trip.

The President was said to have been kept in the dark till the coup was hatched.

The plan was to hoodwink Buhari and present him with Oshiomhole’s resignation letter to prevent any intervention.

A reliable source, who spoke in confidence, said: “Some of the governors behind the ambush had relocated to Abuja ahead of the invitation of Oshiomhole by the DSS. I

“In fact, one of them told a member of the Election Committee in his state to expect a major news on Sunday. He was quoted to have said ‘by Sunday, Oshiomhole is gone and all of you will be put to shame.’

“They opted for forcible removal of Oshiomhole to take advantage of the substitution window for candidates.

“The two options considered against Oshiomhole were either to get the DSS to arrest or invite him.

“Some of the governors actually felt that arresting him on spurious charges of fraud would make greater news and prevent Buhari from intervening like he did in the case with some judges.

“Unknown to the plotters, the APC national chairman had travelled to lyamho, his village in Edo State, to spend the weekend before jetting out to meet with his family abroad on Tuesday.

“The trip to Edo frustrated the first leg of the plot as it was too late for the DSS operatives involved in the plot to stop him from traveling to Edo State.”

Another source gave insight into how Oshiomhole received DSS invitation and why he reported to the agency on Sunday.

The second source said: “Last Saturday, a call was put to Oshiomhole by a DSS operative in Iyamho with an urgent tone that he should report at the DSS headquarters. But the APC chairman was not moved because he did not commit any crime.

“On Sunday, he returned to Abuja and honoured DSS invitation where he was told about a petition against him bothering on fraudulent activities.

“For about eight hours, it was a ding dong affair between the DSS interrogators and Oshiomhole over a demand for his resignation letter.

“Being an intelligent leader, Oshiomhole pointedly asked for a copy of the petition against him for his response, because he knew he did not engage in any fraud.

“No petition was presented to him. He rebuffed all attempts to force him to resign.

“While the drama was going on, the governors behind the set up were using some proxies to monitor Oshiomhole’s engagement with the DSS.

“The Northcentral governor was said to be in his house in Abuja with an official of the party from a state also in the North who they had hoped to appoint as acting chairman.

“The governor’s impunity in his state was condoned by the party before Oshiomhole took over but now, the governor is being asked to do things in accordance with the APC constitution.

“He is also not happy that Oshiomhole is insisting on direct primaries.

“His fear is that when his election is due later in 2019, direct primary will not favour him. He was one of the governors who told the public that the APC National Executive Committee (NEC) opted for indirect primaries some months back as against direct primary which was the preferred option.”

After being adamant for many hours, Oshiomhole was let off the hook by the DSS.

He insisted that he would not resign without hearing from the President and they could not provide any evidence that the President knew about their action.

On how he left DSS custody, the source said: “In fact, a governor of the APC came to pick him. There was no issue of surety at all.

“It was uncertain if the governor was just being benevolent or was one of the plotters.

“The governors who were in Abuja had already put a media plan in place to force the NWC to issue a statement that Oshiomhole has resigned.

“The governors later realised that the plot had failed as soon as Oshiomhole survived the siege in DSS headquarters.

“Curiously, some forces in PDP were also in a hotel trying to know the outcome of the unfolding drama in APC, having been told of the plot by their collaborating governors.

Findings, however, confirmed that the President was not aware of either his invitation or the demand for his resignation.

A presidency source added: “The President was shocked and angry when Oshiomhole met with him on Monday on his ordeal. He promised to look into the incident.

“What the aggrieved governors did not know is that the APC chairman was always briefing the President on the challenges facing the party in some states. So, the President and Oshiomhole are always on the same page.

“The affected governor was speechless and left the Presidential Villa in shame.”

Buoyed by the backing of the President, Oshiomhole left the country on Tuesday to meet his family.

A party source said: “He had already scheduled his personal trip. He was undaunted. He is not on exile. He has not committed any fraud.”

It was gathered the APC national chairman returned to the country yesterday.