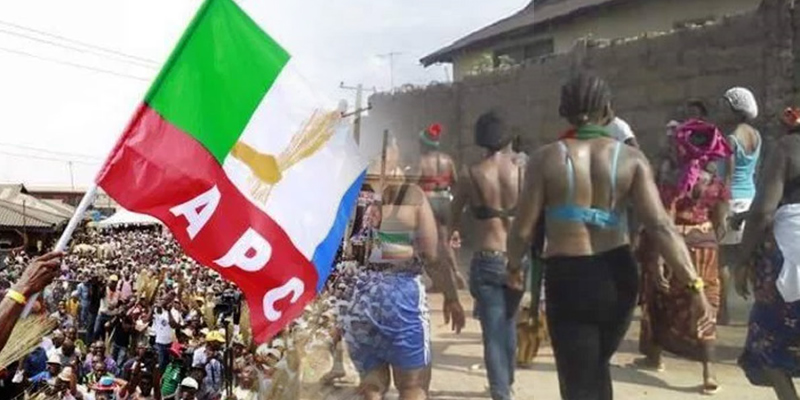 Several women from the three senatorial districts in Ogun State had taken to major streets of Abeokuta metropolis on Thursday, to protest the alleged imposition of candidates in the state.

They said, they will also occupy the Federal Capital Territory, Abuja, naked, on Friday, if the National Working Committee, NWC, and the APC National Chairman, Adams Oshiomhole, failed to announce the consensus candidate of the party, Adekunle Akinlade as the substantive governorship candidate.

The Deputy Governor of the state, Yetunde Onanuga, while addressing the protesters, said she was ready to follow them to occupy Abuja.

The protesters, armed with placards with various inscriptions, also stormed the secretariat of the Nigeria Union of Journalists, Oke-Ilewo, Abeokuta, and accused the NWC of announcing an aspirant “who is not popular” as the party’s governorship candidate.

Addressing newsmen, APC Women Leader, Shade Giwa, claimed the party voted for Akinlade during the primary election on October 2, and he emerged as the winner, but the electoral committee announced Dapo Abiodun as the winner.

“We want Nigerians to know that we, in Ogun State, are of Ogun standard and we cannot take anything apart from that.

In the party primary recently conducted in Ogun, we voted for Akinlade, we don’t know Dapo.

“Akinlade is the one who all APC women voted for and anything apart from Akinlade is a no to us.

“We are warning the NWC, led by Oshiomhole, because women are going to take action if they fail to announce Akinlade as the party candidate before Friday. We are going to storm Abuja to express our displeasure and we will go naked,” Giwa said.