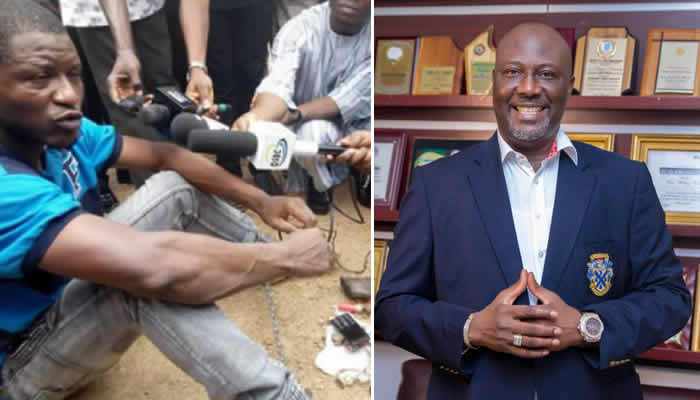 The force spokesperson, Moshood Jimoh, in a statement on Monday, explained that the Federal Special Anti-Robbery Squad trailed and arrested Kabiru Saidu, a.k.a. Osama, 31 and Nuhu Salisu, a.k.a. Small, 25, after a gun battle with a police team.

According to him, the gun battle lasted for some hours on January 19, 2018 at Ogojueje in Dekina Local Government Area of Kogi State.

The police alleged that the suspects confessed that they were contracted by Melaye to work for him as political thugs during their meeting with him in December, 2017, in his car along Airport Road, Abuja.

The force also explained that the men admitted to have carried out kidnappings and armed robberies in different towns in Kogi State and its environs.

The statement said, “According to the gang leader, Saidu, he has been working as a political thug for one Alhaji Mohammed Audu, a politician in Kogi State. He said Audu invited him to Abuja and introduced him to Senator Dino Melaye and they met on Airport Road, Abuja inside Melaye’s car in December, 2017.

“The suspect further confessed that Melaye told him that they should start working for him as his political thugs and they should recruit and train other thugs to work for him in preparation towards 2019 general elections to enable him ( Sen. Dino Melaye) to challenge his political opponents and disorganise Kogi State.”

Moshood stated that Saidu confessed that Melaye allegedly handed over a bag containing an AK47 rifle, two pump-action guns and N430,000 to share with his boys.

Consequent on the alleged indictment and criminal confession against Melaye by the principal suspect, Saidu, the police said they wrote a letter dated March 2, 2018, addressed to the Senate President, requesting him to release Melaye to report to the Commissioner of Police, Kogi State Command on March 7, to answer to criminal offences levelled against him to enable the force to carry out a discreet investigation into the confessions of the principal suspect against the senator.

“But Senator Melaye has refused to honour the police invitation till date,” the police complained, adding that a case of criminal conspiracy and unlawful possession of prohibited firearms had been filed by the police at the Federal High Court, Lokoja on March 16, 2018 against the two suspects, Melaye and Audu, who is now on the run,” the force said.

However, Melaye has said he will seek damages from the Nigeria Police over allegations that he was arming thugs in Kogi State.

Melaye, on his social media platforms on Monday night, raised questions on the allegations by the police.

According to him, he is steps ahead of Governor Yahaya Bello of Kogi State and the police.

He said, “Some questions: Are the police relying solely on confessional statement from these guys? Has the investigations been concluded and Dino is found wanting? Have the police ever invited him (Dino) for questioning? Are they ready to charge him to court with this?”

Melaye added, “Dino, congratulations. You’re on your way to making some hundreds of millions. Just make sure it makes the news on international media, the damages will be massive.”