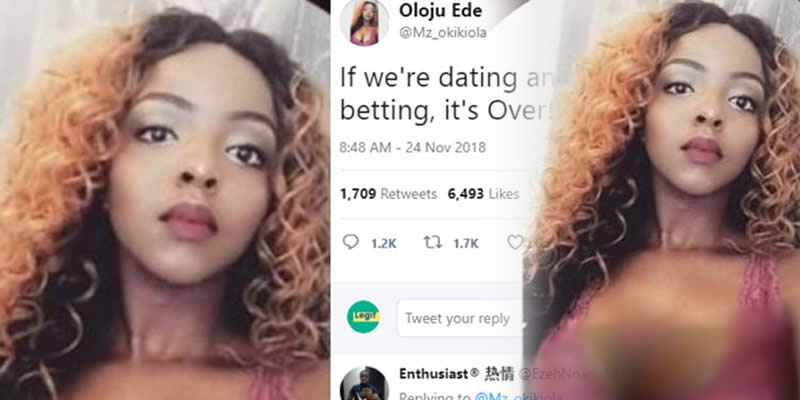 If we’re dating and I find out you play sports betting, it’s over – Beautiful lady says

There is this notion that what you will not tolerate as a rich man, you should start rejecting before the wealth will come to stay.

She took to micro blogging site, Twitter, to vent her anger about men playing the game on Saturday, November 24.

“If we’re dating and I find out you play sports betting, it’s Over!!”

If we’re dating and I find out you play sports betting, it’s Over!!

She ended her tweet with a double exclamation to show emphasis and make men know she is not joking.

Her tweet gathered a lot of reactions as many teasing her. One said sport betting is the highest employer of labour in Nigeria.

Sports betting is the highest employer of labor in Nigeria

Another teased her that her current boyfriend might be doing it but hiding it because she does not like it.

Permit me to say your present guy plays it. He’s just hiding it because he knows you don’t like it.

She also got support from another man who said he does not play the betting game as he does not watch local league matches.

Please, don’t believe what he says, many of us hate sport betting with passion. It is addictive and have the potentials to derail young people from their responsibilities. Although, if you want to clear your doubts, you can ask him.

Lies from the pit of hell. Not all guys does football betting nor any kind of betting either. Besides, can even remember when last I watched even first half of any of those league matches let alone full.

Oga, na you be “her oga at the top?”
This one you’re denying like this.. Lol!!
Mind you I didn’t say all guys bet.
Thank you..
Happy Sunday

Dont need to be her “Oga at the top” to have an opinion. My response was indirectly at your certainty of your assumption.

PS: No cause for denying. I’m an adult with a choice.

Have a great sunday!

Another claimed sport betting is a youth empowerment programme.

Another mocked her by saying she will drop the idea if he wins N27 million.

Hear say I win 27mill now u will be like baby come let’s go and watch match so you will know teams that are in form….???

Another guy hit her back with her words to favour him.

If we are dating i found out u dont support my sport beting hustle its over!!?

A clash between some operatives of the Lagos state task force and a set of youths in the Oshodi area of the state have reportedly left three motorcycle riders dead.

Sources who witnessed the incident claimed that the victims were hit by stray bullets shot by security operatives with the intention of warding off the rascally youths.
You may also like to read;Sean Tizzle says he is better than most popular musicians, Nigerians react

“Violence can be oddly satisfying”- Nigerian lady says after slapping a…

SHOCKING: Married woman reveals why she raped her gateman