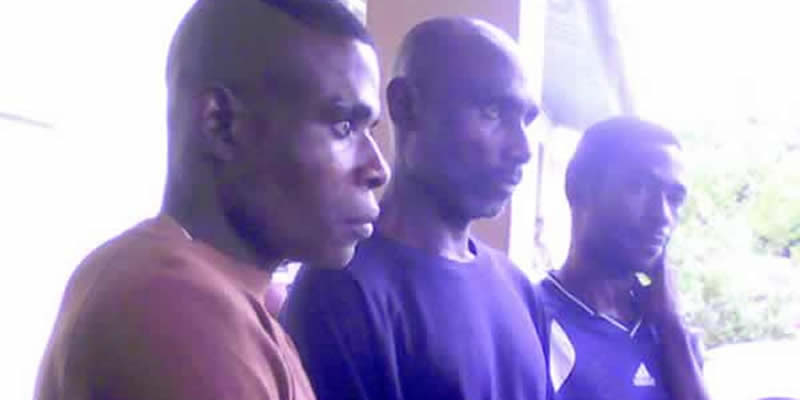 Police operatives in Abia State have arrested three suspects for allegedly robbing, kidnapping and killing a serving member of the National Youth Service Corps identified as Nnadozie Ohanyerem in Umuahia.

The suspects are Uchenna Kalu, Augustine Ihekoronye and Eze Anthony.

It was gathered that the deceased was a serving corps member in Rivers State, who came to Abia to visit his friend at the Escoba Estate, Umuobia, Olokoro suburb of Umuahia.

Police investigation revealed that Ohanyerem was ambushed by the suspects on September 9, 2018, while driving into his friend’s residence in the estate.

It was learnt that the suspects robbed him of his cell phone and that of one Daniel Ayelabola, who came to open the gate for him.

The police added that the suspects allegedly abducted the deceased in his Toyota Avalon car with number plate KYA 383 E.

According to police findings, the suspects later shot the deceased, threw away his body along the Olokoro Road, while his car was taken to other gang members in Owerri, Imo State.

The police added that the deceased’s car was taken to one Martins Anthony, a car dealer and the alleged kingpin of the gang, through the help of a naval officer identified as Victor Oparacha.

Luck, however, ran out on the suspects when Anthony called the father of the deceased and told him to pay some money into his account for him to return the stolen car.

A police source said Anthony was placed under watch through his account number and he was arrested while trying to withdraw money from the account.

Ihekoronye and Anthony, however, claimed that they were panel beaters, who were working on the deceased’s car.

They said the car was brought to their workshop by one Kalu and others now at large for repairs.

The Police Public Relations Officer in the state, Mr Geoffrey Ogbonna, confirmed the arrest of the suspects.

He said they would be arraigned on a charge of murder, adding that the police would continue to search for the other suspects now at large. You may also like to read; Publish identities of Melete Army base attack victims, Ezekwesili tells Buhari

Man bitten by snake dies at herbalist house in Umuahia