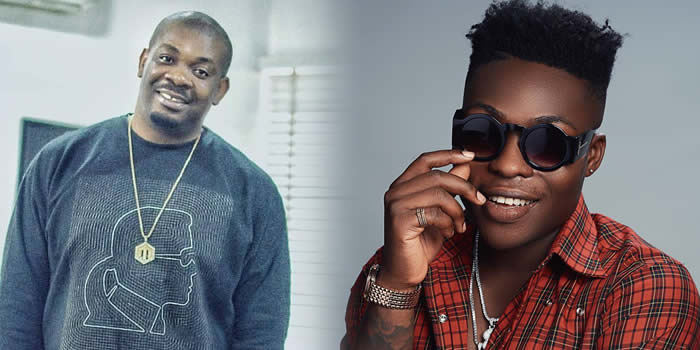 Following Reekado Banks’ recent exit from Mavin Records after the expiration of his 5-years contract and announcing the establishment of his own Record Label, ‘Banks Music’, his former label boss, Michael Ajereh, popularly known as Don Jazzy, has confirmed that the ‘Doro Bucci’ crooner parted ways with the label under no acrimonious circumstances.

According to Don Jazzy who finally broke silence on the matter, though Reekado Banks is no longer bound under a management contract, he is still part of the Mavin Records family.

“We will forever be a family bro. we’re all proud of what you’ve achieved and will still grow into. Thanks for giving us some time in your amazing journey. I don’t want to say we will miss you because we know your house. If we need some Reeky fire, na to come burst you for crib. If you like dey toilet we come through. It’s been an incredible 5-years, wishing you nothing but success”, he said, while wishing Reekado Banks well on his exit from the label.

Meanwhile, since Reekado Banks announced the expiration of his contract and exit from Mavin Records, it’s been business as usual as for him as he has declared a new management team, confirming that he is ready for business and a new lease of life outside his former management.

“Going forward, Banks Music; for all business dealings, please contact my management @probotng”, he announced on all social media platforms.

Why I want to date Don Jazzy – Nazo Ekezie

However, speculations have revealed that Korede Bello may be the next to announce his exit from the label. Though the news of his exit is yet to be confirmed, sources close to the ‘Do Like That’ singer say he is likely to part ways with Mavin Records soon just like Reekado Banks.