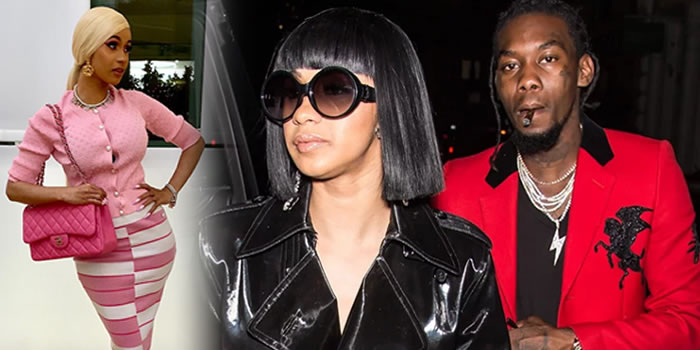 Cardi B reacts to Offset’s public apology, speaks on taking him back

Popular American rapper, Cardi B has reacted to public apology by her estranged husband. Cardi B threw everyone for a loop earlier this month when she announced split with her husband, Offset over cheating allegations.

However, Offset had days back on Instagram shared a video begging Cardi to forgive and have him back as his birthday gift.

He also came on stage while she performed at the Rolling Loud festival on Sunday to beg her for forgiveness but she refused to accept his plea.

READ: Davido makes u-turn to reconcile with teenager he cyber-bullied, promises to pay her fees

Cardi B cuss out Twitter user who said her daughter, Kulture isn’t…

Some social media users called him out for being so insensitive and disrupting her performance. Others insulted him for not showing remorse all the while he was cheating, only to turn around and start begging for apology now that it’s too late.

The social media criticisms directed at Offset was so much that Cardi B stepped in and asked her fans to respect him because he’s still the father of her child.
She pointed out that the last thing she wants is for her baby daddy to become suicidal.

When a follower suggested that Cardi’s statement means she’s taking Offset back, Cardi quickly shut the follower up.

On her Instagram live, Cardi said “I don’t know the future or what will happen then but for now, I have not taken Offset back.”

You may also like to read; Offset apologises to Cardi B, begs her to accept him back (Video)

Cardi B declares interest in politics

‘I’m filing for my Nigerian citizenship.’ – Rapper Cardi B