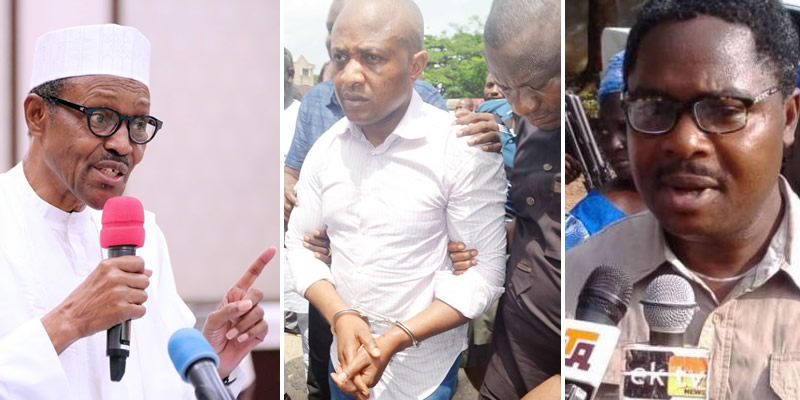 According to PDP’s Director of Media and Publicity, Lere Olayinka, “The way the APC is going with its desperate political recruitments, we only hope Nigerians won’t one day see Evans, the alleged kidnapper mounting the rostrum to campaign for the reelection of the President”, said in a statement on Sunday.

The Peoples Democratic Party (PDP) Presidential Campaign Council in Ekiti State challenged the All Progressives Congress (APC) on Sunday to tell Nigerians the political history of those President Muhammadu Buhari will inaugurate as members of his campaign council on Monday.

The PDP urged Ekiti people in particular and Nigerians in general to take note of those President Buhari will be presenting tomorrow as Vice Chairmen (North and South), Director General as well as Zonal Coordinators of his campaign.

The statement read; “PDP, like every organisations had its fair share of bad elements and we are happy that those corrupt elements left the party and are now comfortably calling the shots in the APC, playing leading roles in the reelection campaign of a President they told
Nigerians had integrity.

“At the top echelon of the campaign council of their Mr. Integrity is Rotimi Amaechi, a man who has lived close to 20 years of his existence on public fund, having spent eight years as Speaker of Rivers State House of Assembly and seven and half years as the State governor on the ticket of PDP. Out of 20 years of his political life, he has only spent four in APC.

“Senator Aliyu Wamakko, who is to lead Buhari’s campaign in the Northwest was elected governor of Sokoto State in 2007 and 2011 on the platform of PDP while his Northeast counterpart, Senator Ali Ndume was elected to the Senate for Borno South, in 2011 as PDP candidate.

“Most importantly, Senator Godswill Akpabio, who is the campaign director for South South was until a few months ago the PDP Leader in the Senate and he was two term governor of Akwa Ibom State as well as Commissioner.

“They have now rechristened these corrupt people that could not fit into the reformed and rejuvenated PDP as progressives, with President Buhari giving them protection. Even properties seized from them when EFCC was still fighting corruption and not being used as attack-dog
against opposition elements as being done under the APC government have all been returned.

“Furthermore, they have been assigned with task of selling Buhari, an expired product to Nigerians so that they can keep enjoying his
protection at the expense of suffering Nigerians.

“Therefore, beyond the APC’s sing song of Nigeria not going back to the PDP 16 years of alleged corruption, the reality is that the
leading lights of APC today are those the PDP found unworthy, who sought protection from APC, a party noted for protecting corrupt people.”

You may like to read; Former NEPA manager dies during marathon sex with a nursing mother in Ebonyi Hotel