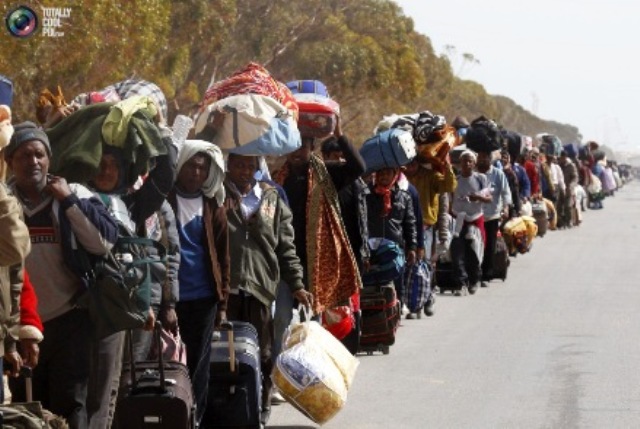 The Save Humanity Advocacy Centre (SHAC), a human rights group, has blamed the Borno State Government over the plight of no fewer than 100,000 refugees recently expelled from Cameroon.

Cameroon is currently home to more than 370,000 refugees, including some 100,000 from Nigeria, according to the UN High Commission for Refugees (UNHCR).

Recently, the Cameroonian government started the eviction of the refugees with larger proportion of the affected persons being women, children and persons that are infirm on account of old age, injury or poor health

SHAC, which said it had been tracking the plan by authorities in Cameroon to evict the refugees in the country, fingered the Borno State government in the ugly development.

Thomas Ejugwu, Executive Director of the group at a press conference on Monday in Abuja, claimed that Cameroon made the decision to sack the Nigerian refugees as pariahs because the Borno State government failed in its responsibility to its displaced citizens.

Ejuma said despite the State government collecting and pocketing huge allocation, there was no road to Rann, one of the communities housing the IDPs.

He said, “SHAC is shocked that Cameroon could be contemplating this move knowing that the larger proportion of the affected persons are women, children and persons that are infirm on account of old age, injury or poor health. The process of returning these families to Nigeria is fraught with risk since Boko Haram has been known to operate on the Cameroonian borders, which implies they could be attacked in their way back.

“The development poses questions about Cameroon’s commitment to long term peace in the region since its tepid support for Nigeria’s quest to end Boko Haram’s reign of terror is a factor that contributed to the dislocation of the Nigerian refugees that is now planning to force outside its territory.

“Cameroon got to this arrogant stage of treating Nigerian refugees as pariahs because the Borno State government failed in its responsibility to its displaced citizens. Without intent to politicise this matter and without prejudice to the ongoing debates about the mechanics of Nigeria’s federalism, the Borno state government failed to act in a way that will promote the fiscal federalism being canvassed across the country. It shirked its responsibility to create the situation were women, children and the aged have been put through hell and they are likely on a ride into the core of hell going by the plan of the Cameroonian authorities.

“The Borno State government consistently misled the Federal Government as to the true state of affairs on ground such that the necessarily federal interventions are planned on the strength of such misleading presentations by the state government.

“The failure of the state government to properly manage relief efforts, including the chronic theft and diversion of relief materials by its officials, created hardship in the Internally Displaced Persons (IPDs) camps, which made taking flight across international borders more attractive to persons dislocated by Boko Haram activities. Even when the state became aware that its citizens are taking such desperate measures, it did little to reassure them and build their confidence to a level where they are willing to voluntarily return.

“Borno government has much to explain about this failure to provide support like inaccessibility of several towns and villages of the state through Nigeria, which makes it easier for indigenes of these communities to get to Cameroon faster than they can relocate to other parts of Borno state. There is no road to Rann and other places due to criminal neglect on the part of the state, even though Rann is a local government headquarters, it can only be accessed through Cameroon to access.

“Assuming the infrastructure was destroyed by the insurgency, SHAC recall urging the state government, sometimes in the recent past, to rebuild these infrastructure as part of measure to empower the people to occupy their community and keep out Boko Haram stragglers that occupy deserted towns and villages and always tip their commanders off about the vulnerability of such unoccupied towns.

“It is therefore pertinent to ask Borno State governor, Kashim Ibrahim Shettima, who has a stranglehold on the finances of local government councils, to explain what happened to the resources meant for Rann Local Government Area and other poorly managed local government areas of the state in the last seven years. This mismanagement of resources has proven to produce a deadly cocktail when combined with Boko Haram’s acts of terror in addition to fuelling grassroots poverty that has ensured the terrorists have a steady stream of recruits.

“The international body has chronically failed to censure countries providing the enabling environment for terrorist groups like Boko Haram to thrive. It is instead seen as being cooperatively in the pocket of such nations without as much as a whimper when make decisions and take actions that place weapons and funding in the hands of terrorists. It has failed to intervene when countries fighting terrorists are blocked from buying arms to prosecute their war efforts. Even in instances where forceful regime change has led to creation of fertile grounds for terrorist groups to grow, the countries involved in provoking such situation are not pressured to make things right.
“The Federal Government of Nigeria has an onerous task on its hands. It can no longer continue to ignore the failure of the Borno state government to perform its constitutional duties. The time for indifference over how Borno state is run by Shettima and his aides is over. While the state governor presently enjoys immunity, his retinue of aides are not covered by the same immunity so the Economic and Financial Crimes Commission (EFCC) should be brought in to unravel what they did with funds that should have made the situation different.

“The EFCC should on the strength of its investigation of these aides make the preparation needed to take Shettima in for questioning when his tenure with the conferred immunity is over.”

‘Any p***y without an odour, is not original’ – Nigerian lady, says

Obasanjo has no dignity to be a Patriot, elder statesman, Shango queries former President

Nigerian army reacts to allegation of extortion by Governor Zulum