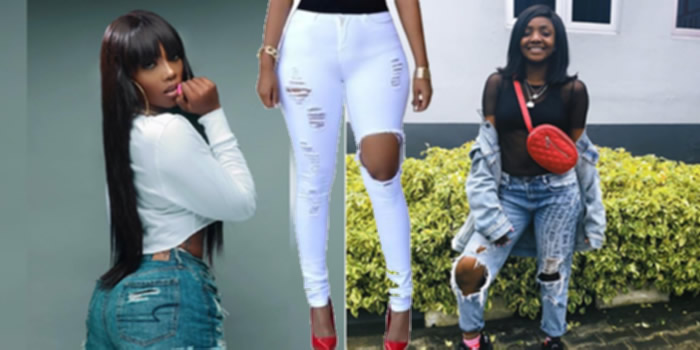 The rate at which things have evolved from what it used to be is alarming. Ideologies, values, morals and fashion styles that used to be trending in past generations have been dumped for newer, more trendy things. One of the common fashion piece that is presently all the rage among Nigerian women is the ‘crazy or ripped’ jeans.

People from past generations have lamented the high rate of improper dressings among the female folks in Nigeria. However, most of them were not really prepared for the recent influx of women wearing denim clothes torn in the wrong places.

These denims usually called crazy or ripped jeans had holes in places that should normally not be exposed to public view. Several reactions have trailed this fashion trend that is so loved by Nigerian ladies.

Football star, Neymar steps out in stylish outfit for the launch of…

In an interview with the News Agency of Nigeria (NAN), some Nigerians opened up about what they thought of the latest embrace of crazy jeans by women. While some people did not see anything corrupting in this fashion item, others blatantly rejected and condemned both the skinny fashion statement and the people wearing them.

For one, King Solomon, a.k.a. Prince of Love, a reggae artist whose songs elevated issues about culture, asserted that identity crises and low self esteem were responsible for the new fashion trends among Nigerians.

He said: “Crazy fashion to me is madness. No responsible, enlightened and sensible person will put on torn cloths unless the person has a mental problem, maybe its mental fashion. I am sorry, but there is no difference between them and a loose psychiatric person on the street.”

Even more, the cultural advocate also linked the present fashion trends to the different economic status quo in the society and presentation of values. For him, people try to emulate the fashion statements of those they consider rich, successful and famous.

In the midst of this, they forget that these celebrities might lead different lives when they are away from the camera. Read his words below:

“It boils down to moral bankruptcy which is being promoted by lack of proper parental guidance, lack of respect for the indigenous cultural heritage, but western influence. Unfortunately, some of them dress so to conform to their artistic role models, forgetting that those artists only dress that way for shows on stage.’’

In light of this, he made an appeal to government agencies and parents to filter through the images and perceptions their children and youths stumble upon by censoring media activities. He also advised the media to, by all means, to combat indecent dressing.

Also, a school teacher Victor Mbuba weighed in on this subject. In his opinion, young boys and girls wore clothes just for the sake of it. They do not give thought to the implication of what they do or wear. He also added these words: “I think torn jeans exposes our youths to more risk of immorality while the skinny jeans can cause urinary or bladder problems.”

Even more, a pastor named Tunde Owofada supported his claim that the wearing of crazy jeans was wrong by quoting scriptural verses.

Taking a cue from first Peter 3:3 to 4, he asserted that “Wearing such outfits in some areas that are very sensitive can lead to the embarrassment of such person’s integrity.We should dress in a way that it will not lead many astray.”

Another cleric, this time a Muslim named Arasiu Salami, said that jeans was not even part of Nigeria’s culture in the first place.

He said: “This so-called fashion has its social implication on the society which is negative; yet more people wear it to occasions and some to their places of work. Celebrities wear them in their videos, some people even enter holy places of worship putting on torn jeans because they want to be part of the “trending’’ fashion.”

NAN also interviewed a retired public servant named Henry Oyediran and his opinion was scathing. He said: “Of course, the craze for crazy jeans is a glaring debasement of culture. The act of poor socialisation and development brought about by foreign culture. But then, it’s not strange among the youth because they are quick at copying attitudes and characters without reasoning.”

One would think that Suleiman Lawal, a fashion designer, would have a different view but he also seemed to think that those who wore crazy jeans were crazy. He said: “The moral implications it has on the society is that the older ones are calling it fashion and making it a trend, while the younger ones are emulating them.”

To wrap up the opinions of others, Wahab Ababia, yet another retired civil servant focused on the measures that are being taken to stop what has now been tagged as indecent. He mentioned the universities in this accord.

“When I was in school, such fashion was prohibited on campus, and defaulters were sent home without wasting time.”

For this man, the government should also follow in the stead of these institutions and take up the challenge of ridding Nigeria of the menace of ‘indecent’ fashion items such as crazy jeans. Recently, Newsmen took to addressing a common question asked by women about how fashion accessories can be used to attract men.

Ladies Get Golden Stitch Braids At Home Today: This Video Will Show You Exactly How…

The World’s Fashion Capitals You Should Visit This Year