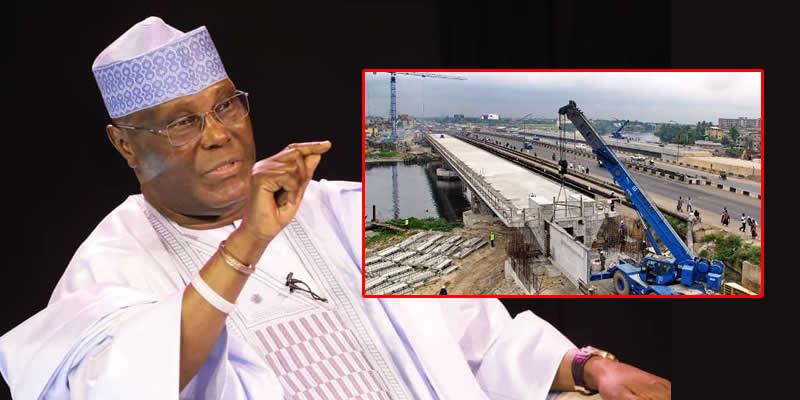 Atiku, who made the promise yesterday at the party’s mega campaign rally in Onitsha, said he would ensure its quick completion because of his wife, who hails from the commercial city of Anambra.

He also promised to ensure the completion and construction of roads in the region with the assistance of his running mate, Mr. Peter Obi.

Atiku, who was accompanied to the campaign field by Obi and his wife, Jenifer Atiku Abubakar, said he was not in Onitsha to campaign, but to present his wife and deputy, who he said were the real contestants.

“I’m not here to campaign, but to inform you that your son, Peter Obi and your daughter are the real contestants. I’m in the minority.

“You asked me to complete Second Niger Bridge, that I’ll do because of my wife. With Peter Obi as the VP, be rest assured that the roads in the region will be completed too,” the candidate said.

Asking the people to get their permanent voters’ cards (PVCs) ready to vote out President Buhari’s  All Progressives Congress (APC) administration at the February election, Atiku asked them to vote for PDP candidates.

Also speaking, the PDP National Chairman, Prince Uche Secondus, who presented the party’s candidates, canvased votes for them at the polls.

During his visit to the Obi of Onitsha, Obi Alfred Achebe, Atiku sought for the blessing of the monarch, which, according to him, would boost his economic dreams for the country.

“Your royal blessing will nurture this quest for new economic direction of our country through new political economy resolve.”

He also assured the monarch that his policy would promote culture and tourism in the country.

He said his administration would complete the Federal Government projects abandoned by the APC, adding that the projects were abandoned because the state “is loyal to the PDP”.

Atiku said the Second Niger Bridge would receive priority attention by his administration.

He said his administration would reward the loyalty of Delta State to the PDP since 1999.

His words: “All the projects abandoned by the APC will be completed. This state has suffered marginalisation by the APC because of its loyalty to the PDP. Because you have been loyal, my government will reward your loyalty.”

Atiku accused the APC of engaging in propaganda, adding that the party has reneged on its promises of fixing the Nigerian economy, tackling security and providing jobs for the masses.

Okowa hailed Deltans for being peace-loving, stressing that “we have built bridges of partnership of peace and relationships. We have built infrastructure, education, health and created jobs through our job creation initiatives. We believe in the PDP vision of bringing peace to all Nigerians”.

Okowa assured the PDP  presidential candidate that the party would win with landslide victory.

He said the APC should be voted out of power because it has failed to keep its promises of revamping the economy, tackling security issues and providing jobs for the teeming youths.

He said the APC has scared businesses away because it was not a respecter of rule of law.

Secondus said the party would cash in on every misstep made by the President and the APC.

He said the Independent National Electoral Commission (INEC) is under pressure to rig the election, but warned that it would be an invitation to war.