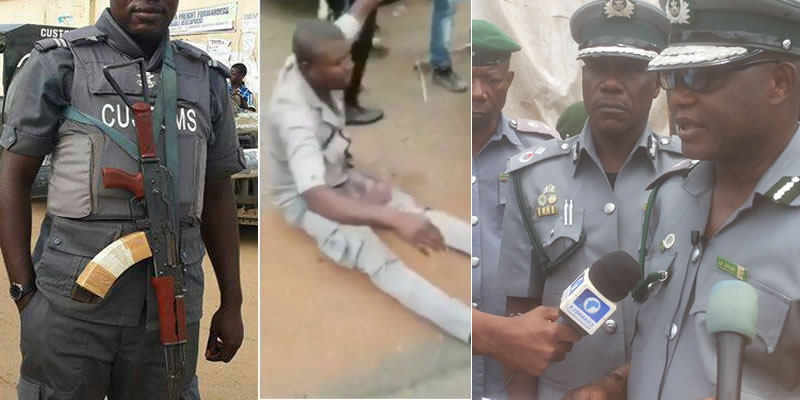 Customs interrogates officers involved in the killing of civilians, to review weapon handling

The Nigeria Customs Service (NCS), says its officers involved in the incident that occurred along Ijebu Ode road on Sunday are being interrogated.

Mr Joseph Attah, the Public Relations Officer of NCS made this known in an interview with the News Agency of Nigeria in Abuja on Monday.

A video which went viral on Social Media on Sunday showed a man, supposed passenger of a commercial bus was allegedly shot dead by a customs officer, though, it was denied by NCS, saying it was an accidental discharge.

Attah explained that the Customs Assistant Comptroller General, Zone A, Ekekezie Kessy had on Monday visited the Federal Operations Unit in the zone at Ikeja, Lagos to interrogate the officers involved.

He said that the investigation was to find out the immediate and remote causes of the unfortunate incident that led to the death of an innocent citizen.

According to him, the interrogation will also reveal if better handling of weapon will have averted the incident.

“The officers involved are being interrogated, we look at it holistically, including weapon handling skills.

“If the officers are found guilty, they will be punished appropriately, we will allow the investigation to take place first.

“We still stand our ground that it is not a passenger of the bus that was deliberately shot dead but the victim was hit by the accidental discharge.

“An audio is now trending from one of the passengers of the bus that the person that died is not one of them.

“We insist that the person that died was not a passenger but a good Samaritan who used to assist our officers, we described him as a friend of Customs,’’ he explained.

The spokesperson said that training of its personnel was a continuous process, adding that the Service often sought assistance of the military in this regard.

“Like we said that in our statement, it is painful and totally unnecessary to lose life in anti-smuggling operations.’’

He urged the general public to be wary of what was being posted on social media because some of those things could mislead them.

“Rig and die” Yoruba youths back Buhari, urge those planning violence to retrace their steps