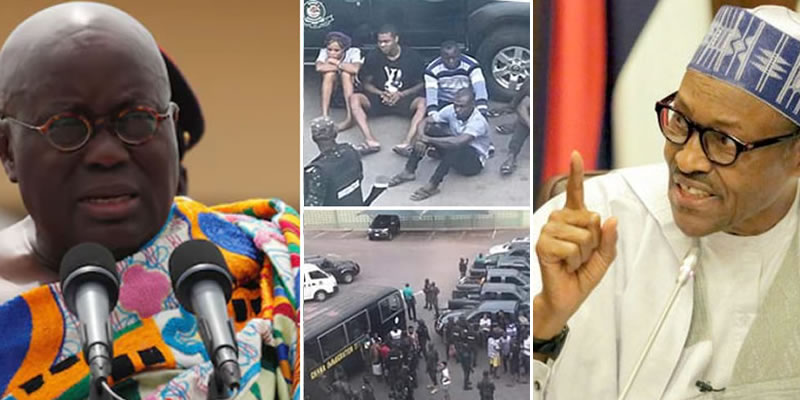 The federal government has condemned the deportation of 723 Nigerians from Ghana on allegations of cybercrime, prostitution and illegal stay.

The Ministry of Foreign Affairs, in a statement by its Spokesperson, George Edokpa on Friday in Abuja, expressed concern over the development saying the federal government also frowned at the reports which included the maltreatment and inhuman conditions entailed in the processes by the Ghanaian authorities.

“Although it is the policy of the Government not to condone any form of criminality on the part of Nigerians in any part of the World, such inhuman treatment and alleged torture of some of these Nigerians in Ghana is unacceptable,” it said.

The ministry said the federal government, through its High Commissioner to Ghana, Michael Abikoye, had registered its displeasure over the disheartening incidents. It stated that the High Commissioner was currently engaging in diplomatic dialogue with the Ghanaian authorities.

Abikoye had during a meeting with the Comptroller-General of the Ghana Immigration Service (GIS), Kwame Takyi, said in Accra that 723 Nigerians had been deported from Ghana since January 2018 to date. The envoy said during the meeting, that the GIS linked prostitution and cybercrime as some of the reasons for the deportations.

He, however, said it was improper to deport Nigerians for alleged illegal stay in Ghana. Abikoye had observed that there were several Ghanaians living in Nigeria but the Nigeria Immigration Service (NIS) had never deported any of them because of brotherliness between the two countries.

He reminded Ghana of the Economic Community of West African States (ECOWAS) Protocol on free movement of persons to migrate to the various member nations without necessary valid documents. He drew the attention of Takyi on several cases of molestation, harassment and torture of Nigerians by the GIS officials, especially those awaiting deportation at its facility. The High Commissioner told the GIS boss that the inhuman act was against the UN Convention against torture, inhuman or degrading treatment or punishment.

He, therefore, implored Takyi to prevail on his officials to treat Nigerians and other ECOWAS nationals with human face and not as common criminals. However, the GIS boss said the service was being compelled to carry out the deportation because of the conduct of some Nigerians in Ghana. According to him, besides engaging in cybercrime and prostitution, some Nigerians had become “law” themselves. He said they engaged in blockage of roads in major Ghanaian streets where they drank, fought and stabbed each other, stressing that their “unruly” behaviour contravened the local laws in Ghana.